An article by Carl Staub from way back! 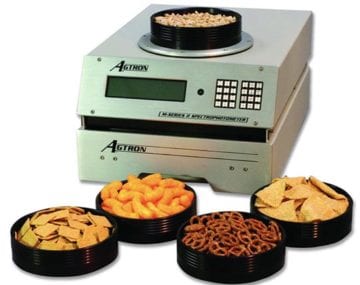 A machine and a color matching system used for quality analysis generally in the food industry, and specifically in coffee: Agtron spectrophotometers are used in the coffee industry and also in other lab applications for – SCAA in 1995)

Many thermal and chemical reactions occur during the coffee roasting 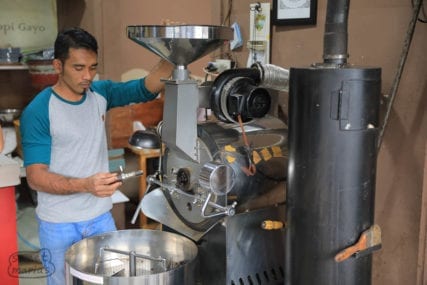 The application of heat to green coffee seeds (beans) to create palatable material for brewing a great cup!: Coffee roasting is a chemical process induced by heat, by which aromatics, acids, and other flavor components process: decarboxylation, dehydration of quinic acidAn important acid in the chemistry of coffee, positive to cup quality in moderate amounts, but leading to perceived sourness and astringency.: Quinic acid is another double-edged proposition in coffee. In moderate amounts it adds moiety, fractionization, isomerization, polymerization, and complexThe co-presence of many aroma and flavor attributes, with multiple layers. A general impression of a coffee, similar to judgments such as "balanced" or "structured" sugar reactions. The principal thermally reactive components are monosaccharides and sucroseSucrose is important to the taste of sweetness in light roast coffees, as it is completely converted or destroyed in darker roasts.: Sucrose is largely destroyed by the roasting process through various reactions and thermal, chlorogenic acids

Sucrose is the principle sugar in coffee. The melting point of pure crystalline sucrose is in the 320-392 degrees F with 370 degrees F most commonly accepted. Degradation of dry sucrose can occur as low as 194 degrees F. and begins with the cleavage of the glycosidic bond followed by condensation and the formation of water. Between 338 and 392 degrees F, carmelization begins. It is at this point that water and carbon dioxide fracture and out-gassing begins causing the first mechanical crackAn audible popping sound heard during roasting. In coffee, one refers to "first crack" and "second crack," which come from two different classes of chemical reactions.: An audible popping sound heard during roasting. In coffee,. These are the chemical reactions, occurring at approximately 356 degrees F, that are exothermicA term applied to thermal reactions, referring to one that releases energy. A classic example is burning. Most parts of the coffee roasting process are endothermic, but first crack is exothermic.. Once carmelization begins, it is very important that the coffee mass does not exotherm (lose heat) or the coffee will taste “baked” in the cup. A possible explanation is that exothermy of the charge mass interrupts long chain polymerization and allows cross linking to other constituents. Both the actual melting point of sucrose and the subsequent transformation, or carmelization, reaction are effected by the presence of water, ammonia, and proteinatious substances. Dark roasts represent a higher degree of sugar carmelization than light roasts. The degree of carmelization is an excellent and high resolution method for classifying roasts.

Trigonelline: A Nitrogenous Base Found in Coffee

Trigonelline is 100% soluble in water and therefore will end up in the cup. Trigonelline is probably the most significant constituent contributing to excessive bitterness. At bean temperatures of 445 degrees F, approximately 85% of the trigonelline will be degraded. This bean temperature represents a moderately dark roast. For lighter roasts there will be more trigonelline, hence bitterness, but also less sugar carmelization. Caramelized sugar is less sweet in the cup than noncaramelized sugar, so when properly roasted these two constituents form an interesting compliment to each other. Trigonelline melts in it’s pure crystalline form at 424 degrees F Degradation of trigonelline begins at approximately 378 degrees F.. The degradation of trigonelline is one of the key constituent control flags for determining the best reaction ratio.

Quinic Acid melts in pure crystalline form at 325 degrees E, well below the temperatures associated with the roasting environment. Quinic Acid is water soluble and imparts a slightly sourSour is one of four basic sapid (in the mouth) tastes: Sour, Sweet, Salty, Bitter (and possibly a 5th called Umami which indicates savory flavors). In coffee, sourness in moderate amounts of favorable, although the (not unfavorably as in fermentedAs a defect flavor, a fruit quality in a coffee that is excessively ripe, toward rotten. Fermented flavor can be the result of poor wet-processing, over-ripe cherry, or some other contamination in the processing. As beans) and sharp quality, which adds to the character and complexity of the cup. Surprisingly, it adds cleanness to the finishSimilar to aftertaste, but it refers to the impression as the coffee leaves the palate. Aftertaste is the sensations gathered after the coffee has left the mouth. We combine these to form the "final flavor of the cup as well. it is a stable compound at roasting temperatures.

Acidity is a positive flavor attribute in coffee, also referred to as brightness or liveliness. It adds a brilliance to the cup, whereas low acid coffees can seem flat. Acidity can sound unattractive. People may and clean finish. It’s derivation rate is one of the key constituent control flags for determining the best reaction ratio temperature and chemistry propagation rates. Additionally, the interaction of melted Nicotenic Acid with other constituents contributes significantly to the intensityWe have a simple scale to rate intensity in our coffee reviews, from Mild to Bold. Low intensity does not mean low quality!: We have a simple scale to rate intensity, from Mild to Bold. associated with darker roasts.

The temperature of the roasting environment determines the specific types of chemical reactions that occur. There is a window of temperatures that produce favorable reactions for the ideal cup characteristics. Temperature values outside of this window have a negative effect on quintessential cup quality. Even within the window values, different temperatures will change the character of the cup, giving the roaster the latitude to develop a personality or style desired, or to tame the rough signature of certain coffees while still optimizing relative quality. System Energy: At any given environment temperature, the amount of energy (BTU) and the roasting system’s transfer efficiency will determine the rate at which the specific chemistrywilloccur. Higher levels of both energy andt ransfer efficiency will cause the reactions to progress more quickly. There is a window of reaction rates that will optimize cup quality. This is called the Best Reaction Ratio, or BRR.

The best cup characteristic are produced when the ratio of the degradation of trigonelline to the derivation of Nicotinic Acid remains linear. The control model of this reaction ratio is a time/temperature/energy relationship. The environment temperature (ET) establishes the pyrolysisA type of thermolytic reaction of organic materials. In coffee roasting it results in caramelization, and a host of other chemical and physical changes in the coffee.: Pyrolysis is the chemical decomposition of a condensed region for the desired chemical reactions while the energy value (BTU) and system transfer efficiency (STE) determines the rate of reaction propagation and linearity of Nicotinic Acid derivation to degradation of trigonelline. Because green bean densityThe density of a coffee bean is often taken as a sign of quality, as a more dense bean will roast more with a better dynamic. The density of a coffee bean is often taken varies dramatically, under any given ET / BTU / STE format, the reaction distribution will vary. it takes longer to obtain comparable uniformity for a higher density bean. Monitoring the bean temperature offers a good method of approximating the reaction distribution during this phase of the roasting. The ideal environmental temperature, ET, for best reaction ratio, BRR, is from -401-424 degrees F, with 405 degrees F as the default value. The BTU required is determined by the systems transfer efficiency, or ability to impart the energy to the charge mass.

Establishing the thermal environment protocol for the ideal roast is a balancing act. While it is desirable to maintain the BRR temperature and energy levels until the target reactions are achieved, the BRR temperature is well above the caramelizationA reaction involving sugars that occurs during coffee roasting. A caramelized sugar is less sweet, but has greater complexity of flavor and aroma. Caramelization is slower than Maillard reactions, and requires higher temperatures. These reactions temperature of sucrose. Because many roasting systems exhibit thermal hysterysis using simple temperature regulating schemes, care must be taken not to allow the coffee mass to exotherm. Additionally, limiting the maximum environment temperature, MET, is also important. As previously mentioned, maintaining structural integrity of the cellulose matrix is of great importance. Lower temperatures will reduce surface evaporation of constituents minimizing the capillary action that draws constituents to the surface where they would be volatilized. Hydraulic action, a function of internal pressure which is directly related to bean temperature, is already at work. By limiting the maximum temperature, losses will be minimized and the essence of coffee retained. Consequently, the MET should not exceed 520 degrees F. This roasting system bases the MET value on the actual final bean, or drop temperature, which correlates to the degree of roast.