Water for Coffee – What do you need to know?

Coffee is 98.75% water. Why aren’t we talking about water chemistry more? 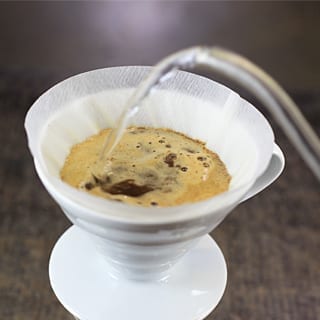 The process of making an infusion of water and roasted, ground coffee. In the most basic sense, hot water is added to coffee ground to produce a drink. Some brewing methods (espresso, turkish coffee) produce More. Like all things coffee though, there isn’t a singular answer.

Question: I have a question regarding water used to brew coffee. I am a home coffee roasterA machine for roasting coffee. Or the person operating it! The basic requirements for a coffee roaster are a heating element that gets suitably hot and a mechanism for agitating the beans.: A mechanism for More and also a homebrewer of beer. Since water is the primary component of both beer and coffee it would stand to reason that the effects of water chemistry could be important to both.  Example: The best pilsner beers usually have water chemistry adjusted to be similar to the city of Pilsen in the Czech republic where the style began. Also, hop forward beers usually have a higher sulfate to chloride ratio so gypsum is a common addition to an IPA brewing water.
Is there any water chemistry profile that brews a better cup of coffee?  Could it be specific to the coffee originIn coffee talk, it refers to a coffee-producing region or country; such as, "I was just at origin." Of course "Origin" for most product we use is not a beautiful farm in a temperate climate, More? Brighter coffees work best with a water chemistry different from a rich Indonesian? Has anyone even looked at this? Am I crazy? I realize this question could head off into the esoteric weeds but if we are trying to brew the best cup I figure we should use the best water.
Thanks, Bob

Reply : It absolutely does make a difference especially in perceived acidity

Acidity is a positive flavor attribute in coffee, also referred to as brightness or liveliness. It adds a brilliance to the cup, whereas low acid coffees can seem flat. Acidity can sound unattractive. People may More. And it makes a difference when peoples water source is extreme in one way or other; extremely hard water or extremely soft. Different waters extract differently for sure as well. Water for coffee matters.

We check our soluble solids and have played around with chemistry. We’ve even tested some products that are supposed to optimize water for coffee. That is compounds that you add to distilled water. But these didn’t seem especially effective, and since in the bay area we have pretty nice water by default, it didn’t seem like something to pursue. If I live somewhere with an extreme water, especially soft water, I wouldn’t be using tap that’s for sure.

Just like there isn’t one single “world’s best coffee” or one “correct brew method” for coffee, I don’t think there is a single best water chemistry profile. It’s going to depend on taste, and as your email states, it’s about pairing a water and a coffee to reach a certain goal. There’s also simply the subjectivity of taste, as well as the cost of adding yet another variable, yet another thing to think about, when just trying to make a cup of coffee.

Some people are going to want to take this on, the people who brew on a scale and weigh their water as well as their ground coffee. Others are going to want to bonk you on the head for over-complicating something that should be simple, like brewing a cup of coffee! I am sort of split between the two sides here. I like to have the information, but it’s unlikely I would actually do the work of checking or adjusting water chemistry when brewing at home, since I already like what I get from minimally filtered tap water.

Bob, your question inspires a more in-depth answer, so expect an article here in the Coffee Library soon. I realize we haven’t addressed this aspect at all – amazing! And no, you aren’t crazy.

Here’s the book on the subject:
https://www.goodreads.com/book/show/29427961-water-for-coffee

A few of the 200 drying beds at Dabaye processing

The original AeroPress is already a very compact b

Mmm... anyone for a cup of hot chaff tea? Oh, just

Coffee ready to load and ship in Costa Rica. Won

As promised, the 2021 Sweet Maria's Cars of Coffee

Who can’t relate a little bit to a defect. I mea

Did you know that using a glass chimney can help y