(07/24/12)
I just returned from the Roasters Guild OriginIn coffee talk, it refers to a coffee-producing region or country; such as, "I was just at origin." Of course "Origin" for most product we use is not a beautiful farm in a temperate climate, Trip to BrazilBrazil is a coffee giant . As Frank Sinatra sang, "they grow an awful lot of coffee in Brazil".: Brazil is a coffee giant . As Frank Sinatra sang, "they grow an awful lot of and there were a number of things that we saw that surprised me in both good and bad ways. We visited 9 different producers or producing groups where the main good surprises were the diversity of cup characteristics that we saw in the many cuppings in the many different growing areas. There was a clarity to many of the coffees that one doesn’t traditionally associate with coffee from Brazil. There was also a range of processingThe removal of the cherry and parchment from the coffee seed.: Coffee is either wet-processed (also called washed or wet-milled) or dry-processed (also called wild, natural or natural dry, and we abbreviate it DP sometimes). styles as well as experiments on many tables where they were looking closely at a number of different factors including; sunny vs shady side separation, varietal performance in different conditions-altitudes-exposures, as well as what was the most promising which was some groups moving towards much more selective picking practices. Most of the coffees we cupped over the week were fairly young and needed more rest, but showed plenty of promise.

Witnessing the traditional Brazilian harvesting practices was definitely the most shocking surprise, even with some prior knowledge of them going into the trip. If you’ve been to other coffee producing areas that use extremely selective picking practices, then seeing coffee shrub branches being totally stripped bare is fairly jarring. Seeing this practice, as well as both the dry processing and pulp-natural processing raised more than a few questions for me. Listening to various producers describe their processes made it clear that there is a lot of confusion about the names of these processes, or at the very least a lot of mixed use of certain terms which can actually lead to a good deal of confusion.

What does Natural mean? I got the clearest explanation of this at FazendaFazenda is the Portuguese word for farm, hence it is the term used in Brazil. Fazenda is not a coffee-specific term. Recreio outside of Poços De Caldas, close to the border between the states of Sao Paulo and Minas Gerais. Natural isn’t so much of a processing style as it is a harvesting style. In Natural Dry processed coffees, coffees fruits are allowed to fully dry on the branches, but at the same time there are coffee fruits at different stages of maturity that are being harvested, some even still quite immature. Traditionally, this was all then dried on patios, thusly it was the Natural Dry ProcessDry process coffee is a method for taking the fruit from the tree to an exportable green bean. The whole intact coffee cherry is dried in the sun with the green bean inside. Later it. But the term Natural has become a catch all for any Dry Processed coffees, even ones that are picked incredibly selectively as opposed to in the Natural style.

Nowadays there are some levels of separation that are taking place even with Naturally harvested coffees. Siphon receiving systems designed by the Brazilian Coffee harvesting and processing equipment manufacturer Pinhalense 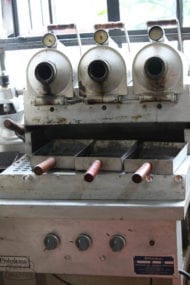 A Brazilian coffee equipment manufacturer, that produces a wide range of equipment for wet-mills and dry-mills, coffee hullers, density sorters, graders, screening machines, roasters, dryers etc. They also make some coffee lab equipment including a (the same equipment used by Emilio Lopez for the Manzano process experiments) have created a means with which to separate the coffee based on densityThe density of a coffee bean is often taken as a sign of quality, as a more dense bean will roast more with a better dynamic. The density of a coffee bean is often taken as well as adding a cleaning stage to all the coffee received. This separation (in tandem with more select picking) is leading to a much more clarified Dry Processed cup profile in many places in Brazil, one that is much more fruit forward as opposed to the traditional layers of tobacco, leather, aromatic woods and spices. In some cases, I found a few coffees to be leaning a little too precariously to some over fermentAs an aroma or flavor in coffee, ferment is a defect taste, resulting from bad processing or other factors. Ferment is the sour, often vinegar-like, that results from several possible problems. It might be the profiles, but was told that these are the coffees that are being rewarded in the late harvest COE competitions.

I believe that these coffees are standing out more because they are so different from what was acceptable in dry processed Brazilian coffees in the past, but in some cases it becomes almost one dimensional with such a focus on the acidity

Acidity is a positive flavor attribute in coffee, also referred to as brightness or liveliness. It adds a brilliance to the cup, whereas low acid coffees can seem flat. Acidity can sound unattractive. People may and not so much focus on sweetnessSweetness is an important positive quality in fine coffees, and is one of five basic tastes: Sour, Sweet, Salty, Bitter, Savory (Umami). In coffee, sweetness is a highly desirable quality, and the green bean has and balanceSuggests a harmony and proportion of qualities, and implies mildness since no one quality dominates.: Balance is both an obvious and slippery taste term. It implies a harmony and proportion of qualities, and perhaps a. I did however find many very impressive Dry Processed coffees that were balanced and extremely sweet, and was told how these coffees were the result not just of selective picking based on brix readings (a reading that measures sugar content), but also were the results of experiments being done looking at sunny vs. shady side planting, as well as drying in shade and at altitude which allows for a slightly slower drying (within a reasonable window to avoid defects) which resulted in a more developed sweetness and complexity.

Speaking to a few different producers about Brix readings also was very enlightening. In El SalvadorEl Salvador coffee had an undeservingly poor reputation for years, marred mostly by the inability to deliver coffee of high quality in an unstable political climate. Unfortunately, agriculture is the first to suffer in revolution, while we were performing the experiments for the Manzano project, most the fruit was considered ready for harvest at a Brix reading of between 19-23 depending on the varietal. In Brazil, the range is much closer to 23 all the way to the mid 30’s, meaning of course that even in some of the very selective picking that there is still a practice of allowing for much more maturing to happen on the branch. This was pretty surprising, especially after seeing some of these coffees on the tables. I was very excited after talking to Jacques and Luiz of Fazenda Sertao, whose coffees we have carried and will have again soon upon arrival of this year’s harvest, about the new cropRefers to fresh shipments of green coffee within the first month or two of the earliest arrivals ... not quite the same as Current Crop, which means the most recent harvest. As a stable dried coffees that we had on the table as well as the work that is going into pushing quality on their farm. It is an uphill battle to retrain an entire workforce, as well as to put the energies into looking at the various possible impacts on quality throughout the process.

Not only is what passes as a dry processed coffee from Brazil changing fairly dramatically, but the cups from many Pulped Natural coffees were also quite impressive. The Pulped Natural process was introduced in Brazil in 1991 by Pinhalense, and the equipment used for the process has played an important role in promoting sweetness and less material in the cup. This process also adds another element of confusion in the way we use certain processing terms. Number 1, they use the word “natural”, which in Brazil it does mean that the natural harvesting style is being used, but it also encourages the misuse of the term natural as a catch-all for Dry Processing. This perhaps makes the use of the terms like “Honey” or “Miel” Processing more appealing, not just aesthetically but in concern for accuracy as well. This process is also called the Semi-washedAn uncertain term to describe a coffee processing technique somewhere between wet-process and dry-process: Semi-washed has been used, most commonly in Brazil, to describe a hybrid coffee process. But it is uncertain if the term process as well, which is also accurate but unfortunately that term has become synonymous with the Wet-Hulled process which is common in Indonesia

USDA is (obviously) the United States Department of Agriculture. USDA also had coffee plant breeding programs in the past and one variety they distributed to Indonesia and was widely planted is called USDA  (sounds like  and nothing like the puled-natural process.

Mucilage indicates the fruity layer of the coffee cherry, between the outer skin and the parchment layer that surrounds the seed. It readily clings to the inner parchment holding the green bean. Think of the from the parchmentGreen coffee still in its outer shell, before dry-milling, is called Parchment coffee (pergamino). In the wet process, coffee is peeled, fermented, washed and then ready for drying on the patio, bed, or a mechanical it is called Mechanically Washed. To clarify, the demucilagers can be set to remove variable amounts of mucilage, up to almost completely clean. In Brazil, each and every time that that specific equipment is used it is referred to as Pulped Natural. This leads to some very cleaned Pulped Natural coffees that really showed some surprising clarity in the cup, and which might have been considered Fully Washed in some places. And yes, there were actually some fully Wet Processed coffees in fermentationA key part of the wet process of coffee fruit is overnight fermentation, to break down the fruit (mucilage) layer that tenaciously clings to the coffee seed, so it can be washed off. Fermentation must while we were there, specially at Fazenda Monte Allegre, one of the largest producers in Brazil. There were also a number of experiments on the tables at Fazenda Ambiental Fortaleza where they were mixing processing methods, resulting some really interesting cup characteristics.

It was inspiring to meet a number of both younger and older producers that are committed to changing perceptions about coffee in Brazil. Of course the consumption of coffee in Brazil is considerable and growing ever larger. We visited a number of roasters and cafes who are doing impressive things with what could be considered a limited pallet, but instead is a fairly broad spectrum of coffees and coffee experiences. The fact that the coffee culture is as rich as it is in a producing country has lead to a number of interesting collaborations, and even though you could sense from a number of roasters their frustrations at not being able to work with coffees from elsewhere, I strongly believe that sometimes a limited arsenal can lead to some exciting results. I really think that Brazil is going to make some interesting moves in Specialty Coffee

Specialty coffee was a term devised to mean higher levels of green coffee quality than average "industrial coffee" or "commercial coffee". At this point, the term is of limited use, since every multi-national coffee broker in the next couple of years, and after this trip, my curiosity for what that can be is certainly piqued.

Would love to hear thoughts on some of the topics covered here, especially in regards to processing terms.