After Testing the Behmor 2000AB Plus and 1600 Plus Heating Elements, here’s what we found:

“The new Behmor’s don’t get as hot as the old ones!”. Or so they say. We’ve heard this story several times from customers after retiring their old BehmorA popular electric drum roaster designed for home use, with variable batch sizes (from 1/4 pound to 1 pound) and a smoke-reduction system. It has been modified and... in favor of a newer 2000 model. After unboxing the new machine and running a roast batchOne of the most important variables in roasting coffee, the weight or volume of the coffee being put in to the roaster will dramatically affect the outcome of..., their enthusiasm starts to fade as they notice the cooler maximum temperatures, even on the hottest roast settings. At least that’s what the LED readout would lead you to believe.

If this is you, rest assured that the Behmor 1600 series doesn’t run hotter than the 2000AB Plus. We were fooled at first by the thermistor readings too. But anecdotal evidence led us to believe otherwise and we’ve finally run some tests to prove it.

If you’ve read any of our Behmor roast profile posts, you’ve seen the warning of not overheating your machine. This typically applies to roasting in manual mode at the highest heat setting of P5 (100%), and means you have to switch between lower heat settings so that you don’t hit the over-temp shutdown (Err7 code), and blowing your roast batch.

As of writing this post, all our Behmor roast articles were performed on the 1600 Plus, not the newer 2000 models, and there’s a big difference between how close they get to that high-heat threshold of roughly 325F. The 1600’s seem to have no problem getting that hot, even after the cooling fan has kicked in mid-way through the roast cycle. The newer 2000 models, however, barely break 300F on the internal sensor readings (B button), if at all.

Does the 2000 AB actually run cooler than the older 1600’s, or is there a change in thermometry affecting the temperature readings?

To begin answering this question, I ran identical roast batches on the 2000 AB and 1600 Plus models I have at home, comparing the minute-to-minute temperature changes on the A and B sensors (exhaust/chamber respectively), and overall roast times. To my surprise, the 1600 put up much higher temperature readings on the LED display, but the 2000 roasted the coffee faster, which obviously makes no logical sense!

I should mention that I recently upgraded my 1600 with the 2-speed motor and new control panel, which allows for manual roasting, and is supposed to have a faster refresh rate for reading thermistor temps. After the upgrade, I noticed slightly lower temperature readings than before. Now the chamber temperature maxes out around 310-315F, and I no longer have to toggle to lower heat settings in manual mode in order to avoid the dreaded high temp shutdown. That said, the temperature readings on the panel are still about 15-20F higher than the 2000.

The simplest way to solve this mystery was to install auxiliary thermocouples in my roasters.

The Behmor is not well-suited for an analog thermocouple, and that’s no big deal.

First, I’ll say that I don’t recommend adding a thermocouple to your Behmor. To me, the Behmor just isn’t suited for that type of modification. I’m constantly trying to speed up my roast, sticking to maximum heat rather than “profiling”. Fiddling with the heat settings will only slow things down.

But more than that, it’s difficult to mount an external probe on the Behmor, and I personally don’t think they provide information that’s more useful than what you already get from stock ones already (especially considering how the Behmor’s airflow causes the temp readings to go a little haywire once the fan kicks in!).

There are plenty of blog posts out there showing ways to add thermocouples to the Behmor – through the sidewall into the chamber, at the exhaust fan, and even drilling the drum “axle” to get a bean probe in the grid drum (though the beans never fall over that part of the grid drum, not to mention, I would hate having to remove my probe before and after each roast!). But even opting for the easiest entry point of the sidewall, you’re left deciding whether to drill a giant hole in the panel that allows you enough room to install the probe through it, or roasting without the panel in place. I really don’t think it’s worth it for anything other than testing!

I opted for a probe in the upper, left corner of the roast chamber (when facing 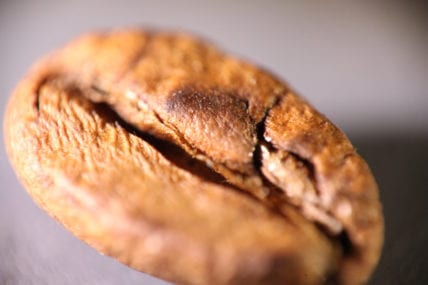 Facing can mean turning toward, standing up to, being brave. But in coffee roasting though, it means scorching a roast.: Facing refers to scorch marks found on the... the machine). All of the mechanics and electronics are mounted on the right side of the roaster, and it’s very difficult to squeeze in even something as small as a thermocouple. The left is basically a blank canvas, so drilling that side made sense. I removed the left-side panel of the Behmor, and drilled a small hole just above the top heating element where the probe would be mounted.

I wanted the thermocouples to be relatively close in proximity to the elements themselves in order to read how much heat they were putting out during the roast cycle. Being so close to the heat source, the readings are very high – a lot higher than if they were inside the drum with the coffee. They illustrate my point for this post, but won’t be very useful when comparing roasting notes with your friends (“…so yeah, first crackFirst crack in one of two distinct heat-induced pyrolytic reactions in coffee. It is distinguished by a cracking or popping sound in the coffee, and occurs between 390... happened around 800F” lol).

It didn’t take long to see that one Behmor obviously ran hotter than the other.

With the thermocouples in place, it was time to roast coffee. I went with my preferred batch size of 250 grams of coffee, sticking with a dense, high grownHigh Grown, or HG, is a coffee designation that can mean different things in different countries. : High Grown, or HG, is the highest quality Mexican coffee designation... washed Costa Rican coffee that I knew could take whatever heat the Behmor threw at it. I roasted both batches in manual mode at the highest heat setting P5 (100%) all the way to the cooling cycle.

Comparing the two graphs, what stood out to me are the overall lower actual temps on my auxiliary thermocouple on the 1600 Plus. Right from the get-go, the 1600 tracked roughly 20F behind the 2000AB Plus, all the way to the end of the roast cycle. It wasn’t that the machine was just cooler at the start either. You can see that the maximum thermocouple reading on the 1600 was 792F, whereas the 2000 clocked 812 (exactly 20F, which is a little weird, but true!).

It’s also very interesting that the 1600’s B temperature reading continued to rise after the fan kicked in at 7:30, even as the heating coil reading began to drop. At first I thought that might have to do with a lag in refresh rate, but the temp never went back down, and just sort of plateau’d at 316F until I engaged the cooling cycle.

The difference in temperature between the two roasters wasn’t huge, but enough to cause a delay in 1st CrackAn audible popping sound heard during roasting. In coffee, one refers to "first crack" and "second crack," which come from two different classes of chemical reactions.: An audible... by 45 seconds in the 1600, and led to an overall longer roast time. For both roasts, I waited 2 full minutes before cooling. The final weights of the roasted coffees were 213.7 grams in the 1600, and 214.5 in the 2000 – remarkably close.

This confirms what we assumed from the outset and observed in the initial roast comparison. The older Behmor models don’t run hotter, but the temperature readings on the panel simply have a higher value reading. At first I thought thermistor placement might be part of what’s different between the two roasters, but they’re both located in the same place on the inside right of the roast chamber.

My guess is that it’s either a change in thermistor, or has something to do with the way the refresh rate is set up on the newer Behmor control panels – could be both. I’m going to do a little more digging to see if we can find out exactly why to have a better understanding of how the models differ.

Exhaust temperatures also differed quite a bit. It’s hard to wrap my head around this one since the air being pulled out of the roast chamber should be about the same in both roasters. A 20F difference should be expected, but not the 140F variance that we see in the graphs. I’ll run another roast test next week with the soft K type thermocouple we sell at the rear of the roaster to measure the exhaust temperatures of the two different models.

In the end, you can rest assured that the 2000 AB series doesn’t just roast as hot as it’s 1600 predecessors, but actually generates more heat at the highest heat setting (P5). This is a definite plus for someone like me, who shoots for faster, shorter roasts in my Behmor in order to highlight a more dynamic cup profile. Also, lower roast temperature readings from the B thermistor on the 2000 models means no more worry of blowing a roast batch by hitting the over-temp shutdown. What’s not to like?

Comment below to share your experience roasting on roasting in the Behmor. We’d love to hear from you!

Check out our Behmor Coffee Roaster Information Resource Page for more information on your Behmor roasters.

Order a Behmor 2000AB Plus HERE