Some thoughts on the new commodification of coffee in response to the old commodification: Is naming farms on labels just a new wrapper or real change?

(This is from our May 2011 Newsletter Tiny Joy originally.)

From the beginning, Sweet Maria’s Coffee has identified coffees we sell with as much information as possible: detailed farm info, altitude, cultivar

USDA is (obviously) the United States Department of Agriculture. USDA also had coffee plant breeding programs in the past and one variety they distributed to Indonesia and was widely planted is called USDA  (sounds like , photographs, processingThe removal of the cherry and parchment from the coffee seed.: Coffee is either wet-processed (also called washed or wet-milled) or dry-processed (also called wild, natural or natural dry, and we abbreviate it DP sometimes). details.. Beyond simply describing a product we sell, we provide clues to the quality that we found in the cup. We also felt that we were doing a “good thing” in a broad sense; we felt that putting the farm and farmer first put the emphasis where it should be, not on Sweet Maria’s as a brand, but on the coffee in a way that was as transparent as possible. So in this way we essentially grew the reputation, or brand image, of that farmer or co-op. Coffee farms as brand names, painful as it sounds, is our current phase on a broader scale in the retail merchandising of coffee.

Coffee was traditionally traded, sold to customers, in a very different way. On the production side, for example in ColombiaColombian coffee is highly marketed and widely available in the US. They have been largely successful at equating the name Colombian Coffee with "Good" Coffee. This is half-true. Colombian can be very balanced, with good, the coffee system was designed around pooling coffee from smaller farms and selling it all as various grades based on bean size, like “SupremoA Colombian coffee grade referring to screen size of 17-18 screen. In the traditional bulk Arabica business, Supremo was the top grade Colombia, with Excelso one step below at 15-16 screen. Neither of these refer” or “ExcelsoA Colombian coffee grade referring to screen size of 15-16. In the traditional bulk Arabica business, Excelso is a step below the large bean Supremo grade, which indicates screen size 17-18.”.  The same was true for Kenyan coffees that were labeled AA or AB, not with a specific farm or co-op name. On the retail side, US-roasting companies sold coffees this way – as KenyaKenya is the East African powerhouse of the coffee world. Both in the cup, and the way they run their trade, everything is topnotch.: Kenya is the East African powerhouse of the coffee world. Both AA or Colombia Supremo, and often created their own brand names for blends,  like a “Breakfast Blend” or another proprietary name masked the name of the farm. (I remember going into Coffee Connection in Cambridge MA back in the late 1980s and ordering Kenya AA and thinking that was really something special! Who knew that 15 years later we would we talking about Kirinyaga region vs. Nyeri?) Blends serve the purpose of allowing a consistent flavor, while the company switches coffees in and out of the blend based on availability; but they also obscure the precise originIn coffee talk, it refers to a coffee-producing region or country; such as, "I was just at origin." Of course "Origin" for most product we use is not a beautiful farm in a temperate climate, of the component coffees.

The small slice of coffee called Specialty has changed a lot in the past ten or fifteen years, both on the supply side and on the retail side. On the supply side, production systems have been adapted to allow for more individually identified (i.e. farm-specific), and smaller, lots of coffee. In many places, the availability of small Penagos 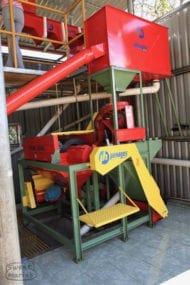 Penagos Hermanos is a Colombian company that produces demucilage coffee processors. This is a forced demucilage machine that uses little water, and removes the coffee fruit layer from the parchment seed using friction and a pulpers using minimal water gave small producers the ability to pulp and dry their own cherry 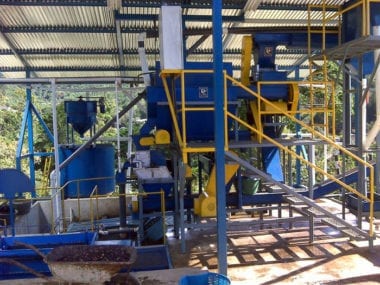 Small independent mills that produced finished coffee, ready for export, usually right on the farm. A Micromill is a tiny low-volume, farm-specific coffee producer who their lots separate, mill it themselves, gaining total control of revolution.” Exporters and importers have also become more willing to handle small lots, a shift partly inspired by the Cup of ExcellenceThe Cup of Excellence is a competition held yearly in many coffee-producing countries, designed to highlight the very best coffees from each origin.: The Cup of Excellence (COE) is a competition held more-or-less yearly in model. This has opened up a broad range of coffee flavors and styles since coffees are not being pooled and flavor generalized. Individual farms that had outstanding quality could sell their coffee under their own name, instead of selling their cherry to be blended into larger lots.

On the retail side, the proliferation of specialty coffee

Specialty coffee was a term devised to mean higher levels of green coffee quality than average "industrial coffee" or "commercial coffee". At this point, the term is of limited use, since every multi-national coffee broker shops from Starbucks on down, has followed (some might say led) the trend of connecting consumers in the developed world with developing world producers. Specialty coffee, like specialty chocolate

So now a good portion of the so-called Specialty coffee trade has abandoned the old and somewhat generic way to brand their product, as AA or as regionally pooled lots, or as proprietary blends and begun branding with new and (presumably) more accurate designations: farm name, farmer name, “micro-lotA term that designates not only a small volume of coffee, but a lot produced separately, discreetly picked or processed to have special character. Read the full definition!: Micro-Lot is a term ripe and ready” from 1686 to 1784 meters, the plot beneath the spruce tree and the creek, the left side of the tree, only round shaped 15 screen beans, etc. I jest.

The idea that coffee, grown on a farm known to produce quality coffee in the past, is necessarily good the next year is a fallacy. Inexperienced buyers who treat farms as brands, i.e. are not critical and blind in their cupping

Cupping is a method of tasting coffee by steeping grounds in separate cups for discrete amounts of ground coffee, to reveal good flavors and defects to their fullest. It has formal elements and methodology in, are actually a threat to the single-farm, relationship coffee effort. Farmers are only too happy to be branded so they can sell all their coffee, good, average, or sub par, at better prices. Even a good farm produces a range of coffee in a single season; that is part of the nature of agricultural work. Not all coffee, even from a good farm, is good coffee.

Ongoing selection is key. The name of the farm means something, but what? That varies based on the practices of the particular farmer, and if you, as the cupperOne who cups, or tastes and evaluates, coffee.: A cupper is a person who performs the somewhat formal analysis of coffee quality, called cupping. See the definition of cupping for more information. It has nothing, taste the same thing year over year. An experienced buyer understands that ongoing cupping is the way to obtain coffee worthy of a farm name at all. It doesn’t start or end with simply forming a buying relationship with a farm. In the best cases, I can give input to a farmer and tell them what I taste in the cup, so they can gain better control of their procedures and methods, and maybe even understand a bit the influence of uncontrollable variables like rain and flowering.

In the worst cases, we see people buying coffee, even over-paying, based on farm name allow. A coffee trader told us how he had no trouble selling a rejected lot from a known Guatemalan farm (one that SM and Intelligentsia Coffee have sold for years) even though it sold for $.25/# than higher rated Guats. The fact is that supplies of specialty coffee are limited; there is only so much coffee of a certain caliber that is produced by a particular farm in a particular year. Despite all the talk of speculators driving up coffee prices, the fact remains that more people are drinking coffee than ever, both in developed and developing countries. One effect of high coffee prices is crime: shipments being stolen, coffee stolen off of trees. The fact is that there are more buyers than supply right now.

For giant coffee buyers, like Starbucks or Nestle, tight supply means it is in their interest to develop new sources, and often that is at or near the bottom end of the coffee market, investing in places like Yunan, China or Vietnam, places that do not have the cultivars or altitude to produce the highest quality coffee. If these businesses don’t rely on the quality per se of the cup, what difference does it make? For us, since we take pride in the quality of the coffee we offer, it sometimes means saying no to a coffee that we have carried for years, but is just not as good this year, or saying yes to new farms.

Another aspect to this is the limited understanding of what a real Direct TradeA term used by coffee sellers to indicate that the coffee was purchased through a direct relationship with the farmer. Unlike Fair Trade and Organic certifications, Direct Trade is not an official, third-party certification. Our program entails. Direct Trade involves building relationships with producers as well as processing, exporting, and importing partners in order to ensure quality and transparencyTransparency is a flavor characterization synonymous with clarity. It is also a business ethics term, implying that as much information as possible about a product is made available to the consumer, and the producer as. Direct Trade is often misconstrued, not just by the public but also a large number of coffee professionals, to mean cutting out the nefarious “middle man”. This leads to a paradigm in which small roasters actually believe that they should be going around a “supplier” so that they can be more direct. They think that they have to do it in order to stay competitive and say that they have these “relationships”. The reality is that the 5-10 bags of coffee a year that they might buy is not nearly enough to support a real quality driven production program. By stepping in this way, they may have ruined a relationship which would have meant a higher quality result and a better or at least more realistic and sustainable price for the producer.

There was no problem necessarily with AA or Breakfast Blend when behind it was the difficult and continuous burdensome work of true quality selection. Conversely the new “brands” of farm name, “micro-lot,” etc can be hollow shills that mean nothing and can be misleading. In fact, this can actually harm the effort toward coffee quality if the work implicit behind it does not exist.

The next phase of branding might be for coffee regions: GIS = Geographical Information Systems, but is made more specific as GIs as it is in wine: Geographical Indication system. This means that a regional name can become a brand. More to come…