When is the new crop coffee coming? Our coffee harvest time table might help you answer this question.

Coffee is generally an annual crop. There are a few producing countries that can have 2 harvest per year (Colombia for example, or Sumatra that has several peak harvests), but generally there is a season ranging for several months in which coffee cherry ripens and can be harvested. Keep in mind that this information is approximate and can change from year to year a bit. The coffee production timetable for many origins is also shifting during the uncertain weather changes from global warming. So we can expect further uncertainty going forward.

And here’s another issue … you could get new crop Costa Rica, for example, in December or January … but would you want to? Probably not! Those shipments are lower grown coffees, lower altitude farms where coffee cherry ripens sooner. These are not going to have the cup quality of higher grown coffees, and will lack bean density and brightness. And sometimes coffee is “rushed” through production for market reasons, ruining any cup quality it has. Coffee needs careful, timely processing, and it needs to “rest” in its outer parchment layer for 30-60 days at least after drying.

Even at the good farms, there are still early, early pickings of ripe cherry that are not usually the best coffee the farm will produce. For that you need to receive a lot of “heart of the crop” coffee, the mid-crop pickings when the cherries have uniformly ripened. The best lots of a farm, their “reserve” lots come from these pickings. In our Costa Rica example, those would arrive in the U.S. starting late March through June, in most seasons. There are always exceptions, and there can always be a great coffee the arrives out of sync with the crop cycle. Sometimes the first Harar arrivals are best, oftentimes not. Sometimes the last Harar arrivals are best. Cupping is the way we find out….

Also you need to factor in the difference between harvest time, the export period for that country, and the time it takes for the ocean voyage. That varies greatly. An El Salvador coffee could be available in the US 2 weeks after export. But a Congo or Rwanda might be 60 days, 2 full months!

I have changed the table to reflect Best Harvest Time and Best Shipment Period … in other words, the peak of the harvest at good altitude farms … in other words, Specialty Coffee. But this is still a very general and rough guide to the Coffee Crop Cycle and should be regarded as an estimate, not a definite. 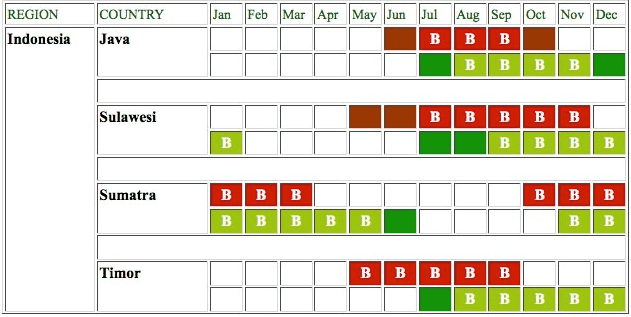 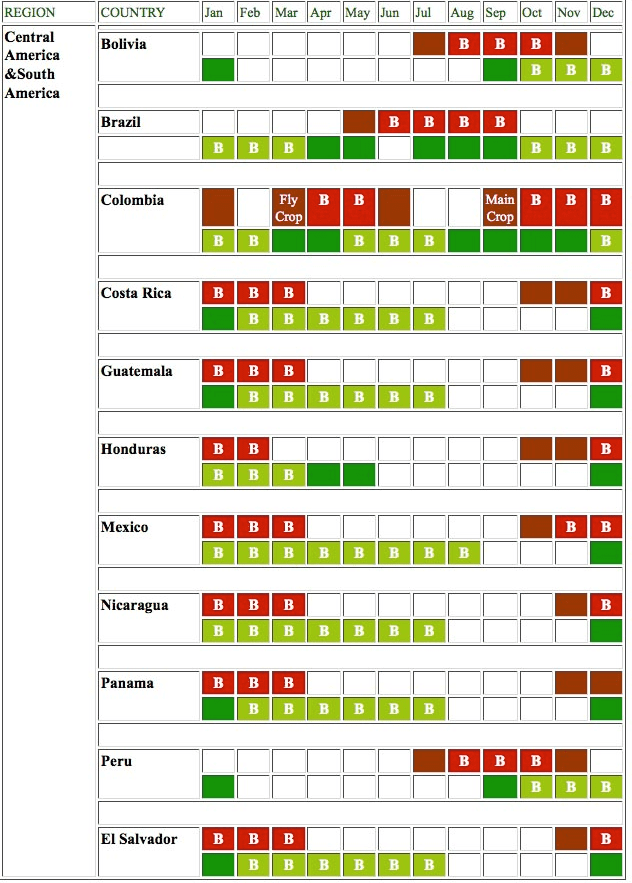 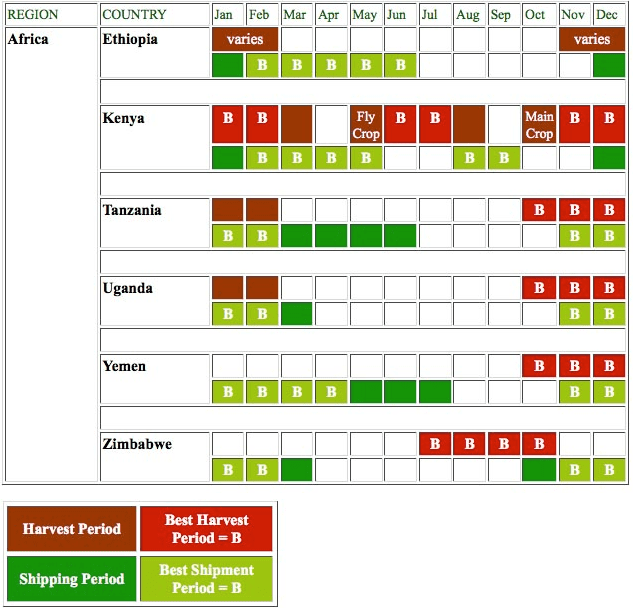