An version attempt at our Coffee Glossary

Sometimes you need to communicate something to others: Terms tend to shift meaning in the coffee industry, but these should be generally comprehensible definitions

Note – this is a very early SM page that eventually became our much more complete Sweet Maria’s Coffee Glossary !

These adjectives relate mostly to the originIn coffee talk, it refers to a coffee-producing region or country; such as, "I was just at origin." Of course "Origin" for most product we use is not... of the coffee and the method of processingThe removal of the cherry and parchment from the coffee seed.: Coffee is either wet-processed (also called washed or wet-milled) or dry-processed (also called wild, natural or natural... it (dry, wet, or both):

Acidity is a positive flavor attribute in coffee, also referred to as brightness or liveliness. It adds a brilliance to the cup, whereas low acid coffees can seem.... Acidity in relation to taste has nothing to do with acidity in terms of the gnawing pain in your stomach. Acidity in coffee might be described by terms like bright, clear, snappy, dry, clean, winey

A taste term to describe a wine-like flavor with a similar perceived acidity and fruit, and some level of acetic acid. It is found most commonly in East..., etc. Coffees without acidity tend to taste flat and dull, like flat soda. Acidity is to coffee what dryness is to wine. Different varietals s will possess different kinds of acidity, like the wine like high notes of some African coffees versus the crispUsually used as a modifying flavor term, such as "crisp acidity" : Crisp can have several meanings, since it modifies other flavor terms. Crisp acidity might mean bracing,... clear notes of high grownHigh Grown, or HG, is a coffee designation that can mean different things in different countries. : High Grown, or HG, is the highest quality Mexican coffee designation... coffees from the Americas. Unpleasant acidy flavors may register as sourness. Dark roasts tend to flatten out acidity. This is a key term in coffee tasting!

Aroma refers to sensations perceived by the olfactory bulb and conveyed to the brain; whether through the nose or "retro-nasally": The aromatics of a coffee greatly influence its.... The aromatics of a coffee greatly influence its flavor profileFlavor Profile implies a graphical impression of a particular coffee, whether it be an artistic portrait or data graph of the perception of flavor compounds. In the case... and comes from the perception of the gases released by brewed coffeeBrewed Coffee refers to all coffee preparations produced by adding non-pressurized water to coffee grounds. Contrasted with espresso coffee, which is produced under pressure, brewed coffee is primarily.... Aroma is greatest in the middle roasts and is quickly overtaken by carbony 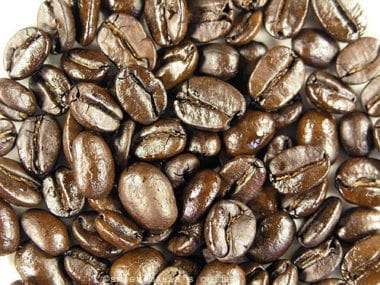 A roast-related flavor term, referring to burnt flavors from dark roast levels. For some this is a pleasant flavor if residual sweetness is present, but plain carbon flavor... smells in darker roasts. Green beans can also have a distinct aroma that may hint at their cup qualities.

BalanceSuggests a harmony and proportion of qualities, and implies mildness since no one quality dominates.: Balance is both an obvious and slippery taste term. It implies a harmony.... A coffee that has several attributes present but does not have one that overpowers others, might be called balanced or mellowA general primary-to-secondary post gustatory flavor characterization, often called "rich" or alternately "smooth" Coffee that has been hanging out in the warehouse, but not really helping out with.... If it simply lacks strong attributes in any significant amount it might be called dull.

BodyAssociated with and sensed by mouthfeel, body is sense of weight and thickness of the brew, caused by the percentage of soluble solids in the cup, including all.... Body is the perceived heaviness of a coffee, sensed on the back of the palate. Extremely light roasts and extremely dark roasts have reduced body, but the term is determined by the type of coffee too. Distinguish between body and the thickness of some brewing methods, like Presspot coffee, where a lot of fine matter floats in the cup after pressing, or EspressoA small coffee beverage, about 20 ml, prepared on an espresso machine where pressurized hot water extracted through compressed coffee.: In its most stripped-down, basic form, this is..., where a lot of coffee oils are present in a small quantity of liquid. conversely, if you brew using too little coffee, or too coarse a grind, the result will be light on body.

Clean. The opposite of wild coffees. Clean-tasting coffees are free of defects, shadow undertones, or varietal distractions.

Complexity. Complexity relates to the co-presence of attributes in a coffee. Acidity, body, earthiness, sweetnessSweetness is an important positive quality in fine coffees, and is one of five basic tastes: Sour, Sweet, Salty, Bitter, Savory (Umami). In coffee, sweetness is a highly..., etc., combine to make a coffee complexThe co-presence of many aroma and flavor attributes, with multiple layers. A general impression of a coffee, similar to judgments such as "balanced" or "structured". Varietals are often blended to increase their complexity.

Flavor. Just a general term to describe the overall impression you get from a coffee.

MustyOff aroma and flavor that reminds one of a dank, moldy closet. This flavor can hint at a dangerous coffee mold and should not be consumed.: Off aroma..., Dirty, RioyA defect term referring to harsh, acrid, medicine flavors from Brazilian coffees of the lowest order; named for Rio de Janeiro. Result of continued enzyme activity when coffee..., Rough. A bunch of bad words. The first two terms relate to poor storage

Green coffee can be stored much longer than roasted coffee: Roasted coffee starts to lose its aromatics in 10 days after roasting. Green coffee can be stored months... conditions, improper aging, or unpleasant earthiness. “Rioy” is an industry term for harshness, (pronounced ree-o-ee after Rio De Janiero), like poor quality low-grown Brazilian arabicas.

Spicy. Underlying “spicy” accent, either aromatic or flavorful. It might relate to the coffee being natural, the character of the acidity or the two combined. Examples are some Ethiopian and Guatemalan coffees.

Wild, EarthyEarthy is a flavor term with some ambivalence, used positively in some cases, negatively in others.: Sumatra coffees can have a positive earthy flavor, sometimes described as "wet..., or Natural. Relates mostly to the processing method used, when the fruit of the coffee cherryOriginally coffee literature referred to the fruit of the tree as a "berry" but in time it became a cherry. It is of course neither. Nor is the... is allowed to dry on the beans before removal. Earthiness can also be detected, I presume, based on the soils the coffee grows in (there are earthy Indonesian coffees that are wet processed). Earthiness can quickly become dirtiness. Dirty coffee is unpleasant. The winey flavors of some wild coffees are called sourSour is one of four basic sapid (in the mouth) tastes: Sour, Sweet, Salty, Bitter (and possibly a 5th called Umami which indicates savory flavors). In coffee, sourness... when it becomes unpleasant.

Roast flavors exist alongside varietal flavors, although they often can mask or destroy them.

Sweet. Sweet refers to the presence of some caramelly flavors developed in a Full City type roast, in balance with other characteristics of a coffee. An overall pleasantness and balance achieved by good roasting that is sensitive to the varietal character of the bean. Sweet might also refer simply to a varietal characteristic, also called soft, mild, or mellow.

Baked or Bready. Under-roasted coffees that haven’t developed their character, or coffees that simply sat in the roaster too long without enough heat. It can also refer to scorched coffees where the outside of the bean is browned and the inside is under-roasted. There’s a particular parched taste that can come with under-roasting too, as with a recent batch of Ugandan Bugisu I roasted recently.

BittersweetBittersweet is from the language of chocolate, and describes the co-presence of positive bittering compounds balanced by sweetness. It is directly related to caramelization, but has inputs from.... The bittersweetness of a coffee develops as the roast gets darker and eventually overpowers other flavors. It dark roasts, acidity is reduced until completely absent, while the caramelly taste of burntBurnt flavors in coffee are the result of over-roasting, fast roasting, or roasting in a high-heat environment. This often occurs when the initial roaster temperature when the green... sugars form the stimulating bittersweetness. This is a newer term but I like the way it refers to the strong flavors of dark chocolate

Burnt: Either the pleasant flavor of Dark French or Spanish roasts or the flat taste of burnt rubber in your mouth, depending on how you view such things.

Other terms may apply related to brewing and serving attributes or problems. Make up a few.

Here is Sweet Maria’s list of roast names from lightest to darkest:

4. American or Light Medium-light brown, the traditional norm for the Eastern U.S.

5. City, or Medium Medium brown, the norm for most of the Western US, good to taste the varietal character of a bean.