There are several types of Abyssinia, but they are not from Ethiopia but rather Indonesia. Abyssinia 3 = AB3.  PJS Cramer, a Dutch plant researcher, introduced this variety in 1928, supposedly from Ethiopia seed stock. It was Mayang

This coffee is the result of working with the local farmers in the oldest coffee-growing region in Java, and wet-processing the coffee in little batches to high standards. Java Sunda (West Java) was the original coffee area, but you would find few trees here of late. Most Java coffee is grown in the East, where the big estates are. Most Java sold in the US is basically East Java coffee. Here in Java Sunda amongst the Ateng 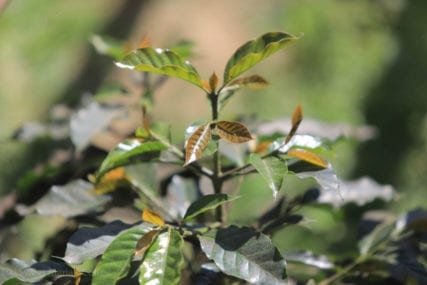 An improved Ateng selection of Timor variety with Bourbon reportedly. The specifics are a little doubtful (Timor x Bourbon) as it is not the result of a plant breeding program, but a selection from North and Jember

S-795 is a variety based on the " S-Line" coffees of  India, and stands for Selection 795,  It has a very fine cup, one of the best in Indonesia, but is not a high volume coffees are some old TypicaA coffee cultivar; a cross between Typica and Bourbon, originally grown in Brazil: Mundo Novo is a commercial coffee cultivar; a natural hybrid between "Sumatra" and Red Bourbon, originally grown in Brazil. It was developed trees, the original Typica, which is quite amazing. This is the fourth year of the project, and we are starting to see better separation of regional lots. Mayang is the project name for coffee collected from the area of Ciwidey. The Mayang coffee is a mix of varieties, planted at a range between 1380-1600 meters. All these coffees were hand sorted.

The coffees from this project in Java have resulted in what I feel are some of the most interesting coffees to roast. Depending on how you handle this coffee in the roaster and what roast level you take it to, it be a dense and rusticA general characterization of pleasantly "natural" flavors, less sophisticated and less refined, but appealing. : What is Rustic? This is a general term we came up with... Dried Apricots from Sun Maid at the supermarket, coffee, or a juicy and fruitedIn some coffee taster’s lexicon, “fruity” means the coffee is tainted with fruit, and “fruited” means a coffee is graced by positive fruit notes. We don't exactly see the difference in terms of these two coffee, or even a combination with apricot and almond liquor with cocoa in the finishSimilar to aftertaste, but it refers to the impression as the coffee leaves the palate. Aftertaste is the sensations gathered after the coffee has left the mouth. We combine these to form the "final flavor. One of the key things about this coffee is that you really need to get it into City+City+ roast is an ideal roast level that occurs roughly between 425 and 435 degrees Fahrenheit in many coffee roasters with a responsive bean probe where First Crack starts in the 395 to 405 degree at least for it to open up. In the lightest roasts of this coffee, the starchiness tends to overwhelm the cup and there’s also an aromatic wood element that becomes more of a spiced cocoa as you take the roast deeper. As you’ll see in my notes though, it’s not just a roast level thing, understanding how to use development in this coffee can really open up a lot of possibilities and help you get the most out of it.

In the cupping procedure for tasting and scoring coffee, this is the smell of the dry, ground coffee before hot water is added. The term fragrance is used since it is normally applied to things, a bit of that apricot. In the warm cup the bodyAssociated with and sensed by mouthfeel, body is sense of weight and thickness of the brew, caused by the percentage of soluble solids in the cup, including all organic compounds that are extracted from brewing is a little more silty and starchy. There’s a tart brightness on the tip of the tongue that carries through the middle of the palate but that isn’t really in the finish. The cup cools nicely, almond liquor throughout the cup, with a big middle. The tartness/brightness is nice, but it finishes with more of the dry walnut/almond acidity

Acidity is a positive flavor attribute in coffee, also referred to as brightness or liveliness. It adds a brilliance to the cup, whereas low acid coffees can seem flat. Acidity can sound unattractive. People may.

Full City – Cookie-like sweetnessSweetness is an important positive quality in fine coffees, and is one of five basic tastes: Sour, Sweet, Salty, Bitter, Savory (Umami). In coffee, sweetness is a highly desirable quality, and the green bean has in the dry fragrance with super walnut notes in the break. In the warm cup there’s a long sweet finish with a little bit of stone fruit or even papaya, a pungentRefers to an aggressive, intense aroma or flavor, often related to spices (pepper) or roast tastes. Pungent foods are often called "spicy", meaning a sharp or biting character, but not unpleasant. Bittersweet tangy roast flavors floral

Floral notes in coffee exemplify the connection between taste and smell. Describing the taste of a specific flower is near impossible...we always default to “it tastes like it smells” which, admittedly, isn’t the most helpful.  fruitiness. The mouthfeelHow a coffee feels in the mouth or its apparent texture, a tactile sensation : A major component in the flavor profile of a coffee, it is a tactile sensation in the mouth used in is still a little silty throughout, pulpyCan refer to fruited flavor or sometimes mouthfeel. In terms of flavor, which is how we normally use it, pulpy fruit, it tends toward the rustic side of things, distinct from dried fruit or over-ripe as it cools which lends itself to the rich fruited notes. It gets more and more pulpy as it cools, and finishes with even more dry walnut than the City +. There’s some sweetness in both this cup and the City+ cup that’s just begging to be opened up.

City+ stretched – Knowing that this coffee had a lot more potential sweetness and looking to take some of the siltiness and starchiness out of the body and make it more juicy, I felt like by stretching the drying stage by 30 seconds to a minute, as well as stretching the 1st crack itself for maybe an extra 20 seconds I could maybe better achieve what I was trying for in the cup. And it worked in a big way. This coffee easily has the deepest and sweetest dry fragrance and break, and right away in the warm cup there is a noticeably much longer sweeter finish, with tanginess, and a lot more of that papaya-like pungently floral fruitiness. It’s not as big in the middle as the Full City roastA coffee that has been roasted to the brink of second crack.: A coffee that has been roasted to the brink of second crack. The internal bean temperature that second crack normally occurs at is, but the longer and sweeter finish more than makes up for that. There’s apricot, more of the papaya throughout the cup, and even some of that tangyAn adjective modifying a flavor descriptor, describing a sharp effect; tangy citrus, tangy bittersweet flavor, tangy green apple. blackberryBlackberry flavor in coffee sometimes relates to slightly more developed roast levels.: Blackberry is found as a fragrance, aroma or flavor in some coffees. I find that it is less obvious at very light roast. The slight stretch of the 1st crack along with the stretch in the drying stage definitely give this cup the best mouthfeel, juicy throughout, and maybe not as much of a peak in the acidity in the middle of the palate but the sweetness in the cup really makes up for it. The cold cup is like chocolate

Stretch it out folks! And don’t go too light.