As new coffees roll in, we have been scoring them with our new spider graphs. We hope they are (and have been) a great tool to help you decide what coffees to buy from our site. We suggest that you also pay attention to the written comments as well since numbers aren’t always the best way to judge a coffee’s taste. If you are really into the dark chocolate

Nicaraguan coffees from the Segovia, Jinotega, Ocotal and Matagalpa regions are nice balanced cups. They often possess interesting cup character along with body and balance, outperforming many other balanced Central American and South American high-grown and SumatraIndonesians are available as a unique wet-hulled or dry-hulled (washed) coffees. Giling Basah is the name for the wet-hulling process in Bahasa language, and will have more body and often more of the "character" that, you will probably be disappointed with even the highest scoring GeshaGesha is a long-bean Ethiopia selection with unique cup character.: Gesha (often wishfully misspelled as Geisha) is a long-bean Ethiopia cultivar selection with unique cup character. It is most famously grown on the Jaramillo plot coffees that have a very light body and floral

Floral notes in coffee exemplify the connection between taste and smell. Describing the taste of a specific flower is near impossible...we always default to “it tastes like it smells” which, admittedly, isn’t the most helpful.  notes.

When reading about a coffee on our site, notice the small images under the main image. Click the circular one with the weird, blue shape inside or CLICK HERE.

There might be a few coffees on our site that still have the old-school graphs. These are larger lots that have been in stock for a few weeks.

Some call them “spider graphs”. Some call them “radar graphs”. Whatever you call them, they can be useful when deciding on what coffees you include in your next order. Our coffee rating system has changed over time and will probably continue to evolve. We are always trying to find better ways to communicate how our coffees taste so you won’t end up buying coffee that just doesn’t taste good to you. Each coffee we sell is rated by Tom and Dan in our cupping

Cupping is a method of tasting coffee by steeping grounds in separate cups for discrete amounts of ground coffee, to reveal good flavors and defects to their fullest. It has formal elements and methodology in lab (usually a day or so before we post the coffee on our site).

Notice how our spider graphs start at 6 instead of 0? We figured we would break the rules a bit since we would probably never carry a coffee that scored under 6 anyways. Starting from 6 also makes for a more dramatic shape in the graph so you can glance at it and tell how balanced or if it weighs in heavy in a characteristic you really like.

It will expand into a larger one where you can quickly see the score and shape of the graph. Click on “zoom” and the graph expands again so you can see all the scores of that coffee. 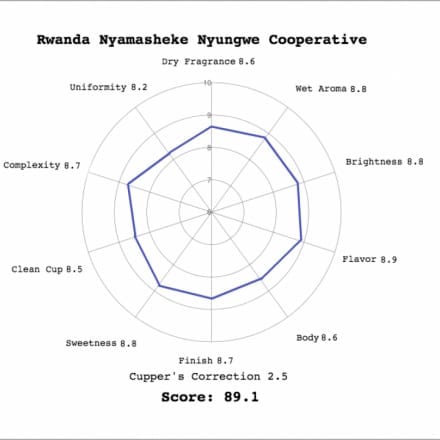 -Dry Fragrance: Refers to the aroma

Aroma refers to sensations perceived by the olfactory bulb and conveyed to the brain; whether through the nose or "retro-nasally": The aromatics of a coffee greatly influence its flavor profile and come from the perception of the dry ground coffee before hot water is added.

-Wet Aroma: The smell of wet coffee grinds, after the hot water is added.

Acidity is a positive flavor attribute in coffee, also referred to as brightness or liveliness. It adds a brilliance to the cup, whereas low acid coffees can seem flat. Acidity can sound unattractive. People may is the taste of sharp high notes in the coffee caused by a set of chlorogenic, citiric, quinic, acetic acids

Many acids contribute to coffee flavor: acetic, malic, citric, quinic, tartaric, phosphoric, etc.: Many acids contribute to coffee flavor; malic, citric, quinic, tartaric, phosphoric, etc. See Acidity or specific acids. While acids in coffee sounds and others, sensed mostly in the front of the mouth and tongue. (It is a good quality; not related to bitterness in coffee, and not directly responsible for upset stomachs). Acidity is prized by many cuppers, and relates directly to the quality of the cup since acidity is the product of high altitude plantings.

-Wet Aroma: The smell of wet coffee grinds, after the hot water is added.

Bitterness is one of 5 basic tastes: Sour, Sweet, Salty, Bitter and Umami (savory flavors). There are many types of bitterness, hence not one avenue to tracking down its source. Bitterness as a positive quality) and many “secondary tastes”.

-Body: Often called “mouthfeel”, body is the sense of weight and thickness of the brewed coffeeBrewed Coffee refers to all coffee preparations produced by adding non-pressurized water to coffee grounds. Contrasted with espresso coffee, which is produced under pressure, brewed coffee is primarily an extraction, and contains a lower amount, caused by the percentage of soluble solids in the cup including all organicGrown without the use of artificial fertilizers, herbicides, etc.: Organic coffee has been grown according to organic farming techniques, typically without the use of artificial fertilizers. Some farms have more local Organic Certification than the compounds that are extracted (the brewing method and amount of ground coffee used influences this greatly). We rate Body on a lower scale because light bodied coffees are certainly not bad, and in some origins the lighter body best suits to overall cup character.

-Finish: The lingering or emerging tastes that come after the mouth is cleared. This includes the time when the coffee leaves your mouth to minutes afterward…a reason that you will find a lot of cuppers revising aftertasteAftertaste refers to lingering residual sensations in the mouth after coffee has swallowed. It might be distinguished from "finish" which is the final sensations of the coffee while it leaves the mouth. Also see Afternose. scores when they are still experiencing a positive flavor a minute or two later.

-Sweetness: SweetnessSweetness is an important positive quality in fine coffees, and is one of five basic tastes: Sour, Sweet, Salty, Bitter, Savory (Umami). In coffee, sweetness is a highly desirable quality, and the green bean has is almost always a desirable quality in coffee, even if it is described in euphemistic ways such as “rusticA general characterization of pleasantly "natural" flavors, less sophisticated and less refined, but appealing. : What is Rustic? This is a general term we came up with... Dried Apricots from Sun Maid at the supermarket, sweetness” or “bittersweetness.” You may notice that refined sweetness (think European pastries, fine candy, white sugar, pure sweetness) scores high, as well as complexThe co-presence of many aroma and flavor attributes, with multiple layers. A general impression of a coffee, similar to judgments such as "balanced" or "structured" sweetness from fruit sugars (fructose). Malty sweetness (maltose) is less traditional, but quite desirable and honeyIn coffee, honey-like sweetness is often found, but we use terms such as refined honey (highly filtered and processed) as opposed to raw honey rustic honey sweetness. This form of sweetness is largely a dynamic can range from the very pure and clean to complex, rustic almost yeasty. Basically, if sweetness is a key to the cup, it will be rated well.

-Clean Cup: Note that “clean cup” does not literally mean that there isn’t dirt on the coffee. It’s just about flavor and raw, funky coffees that are “unclean” and the flavor can also be quite desirable, such a wet-hulled Indonesia

USDA is (obviously) the United States Department of Agriculture. USDA also had coffee plant breeding programs in the past and one variety they distributed to Indonesia and was widely planted is called USDA  (sounds like  coffees from Sumatra, or dry-processed Ethiopia

Ethiopia is the birthplace of coffee: it is in the forests of the Kaffa region that coffee arabica grew wild. Coffee is "Bun" or "Buna" in Ethiopia, so Coffee Bean is quite possibly a poor and Yemeni types.

-Complexity: Complexity compliments “flavor” and “finish” scores, to communicate a multitude or layering of many flavors. It means that there’s a lot to discover in the cup. Then again, simple coffees can be a relief after over-exposure to many powerful, intense, complex coffees.

-Uniformity: Uniformity refers to cup-to-cup differences. Dry-process coffees can be less uniform than wet-process coffees by nature. We would never avoid a lot that has fantastic flavors if occasionally it waivers. This is scored during the cupping protocol, where multiple cups are made of each lot being reviewed.

-Cupper’s Correction: This is adopted from the SCAA system and Cup of ExcellenceThe Cup of Excellence is a competition held yearly in many coffee-producing countries, designed to highlight the very best coffees from each origin.: The Cup of Excellence (COE) is a competition held more-or-less yearly in scoring (they sometimes call it “Overall Points”). It allows a cupperOne who cups, or tastes and evaluates, coffee.: A cupper is a person who performs the somewhat formal analysis of coffee quality, called cupping. See the definition of cupping for more information. It has nothing to ensure that the total score correctly communicates the overall impression of the cup. You might criticize this approach and consider it “fudging”the total. In a way, you would be correct … but it would be much worse to change the category scores to acheive the desired total (to give a coffee a 9 for acidity when you know it is a 7), or conversely to have a coffee that absolutely deserves a 90 end up at 84. The specific Cupper’s Correction number matters naught, be it a 5 or an 8 … the idea is that the total score gives a correct impression of the coffee quality.

It’s Not About The Numbers

Don’t get hung up on the total scores. If you are looking for bright citrus notes with tart acidity, you will be disappointed by even the highest scoring Sumatra with tons of earthiness, body and dark chocolate notes. Take a look at how the coffee is scored, not just the total score. More importantly, read the review…it’s an actual narrative of how the coffee tastes and we always use comparisons to foods, fruits and drinks that you are hopefully familiar with.