To an expert, green coffee

I am not an expert on defects (you have to work in the industrial/commercial end of the trade to see lots of bad coffee!), but I cup and roast coffee everyday. I prepared this image (below) from coffee samples in my “green coffee files” at the request of my customers. The image is not all-inclusive, and is not composed entirely of defects. There are charts of coffee defects available through the Specialty Coffee

Specialty coffee was a term devised to mean higher levels of green coffee quality than average "industrial coffee" or "commercial coffee". At this point, the term is of... Association of America (scaa.org)

The preparation is part of the “coffee culture” of a specific place, part of the common practice of the people who produce a specific coffee. An inexperienced roasted can easily interpret the presence of more silverskinOn dried green bean coffee, the thin inner-parchment layer that clings to the bean and lines the crease on the flat side. Silverskin becomes chaff and falls off... (chaffChaff is paper-like skin that comes off the coffee in the roasting process. Chaff from roasting is part of the innermost skin (the silverskin) of the coffee fruit...) that gives the coffee a very yellow appearance as a defectIn coffee, a defect refers to specific preparation problems with the green coffee, or a flavor problem found in the cupping process. Bad seeds in the green coffee.... You will see more silverskin on late harvested coffees no matter what the varietal.

Ultimately, the quality of a coffee is found in the cup. 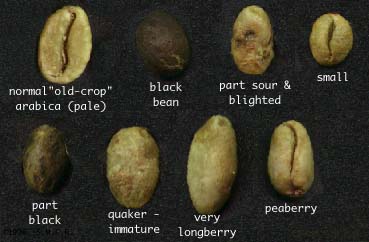