We ran out of the Orange BourbonA variant of Bourbon that ripens to an orange color. While the cup quality is on par with Red Bourbon (and no discernable cup quality differences from the Red type), the added challenge to harvest, but the sister lot El Salvador Yellow Bourbon Cultivar is now here. BourbonA coffee cultivar; a cross between Typica and Bourbon, originally grown in Brazil: Mundo Novo is a commercial coffee cultivar; a natural hybrid between "Sumatra" and Red Bourbon, originally grown in Brazil. It was developed coffee is a classic cultivar

USDA is (obviously) the United States Department of Agriculture. USDA also had coffee plant breeding programs in the past and one variety they distributed to Indonesia and was widely planted is called USDA  (sounds like , named for the island of Bourbon (now called Reunion) where it was originally cultivated. When we call it classic, we mean not just the fact that it is a lower-yield, heirloom plant, and that it has a very dense seed that roasts well, but also the cup character. Bourbon (pronounced Bore-Bone), especially those from El SalvadorEl Salvador coffee had an undeservingly poor reputation for years, marred mostly by the inability to deliver coffee of high quality in an unstable political climate. Unfortunately, agriculture is the first to suffer in revolution,, are neo-typical Central American coffees. They are bright, aromatic, balanced, semisweet or bittersweetBittersweet is from the language of chocolate, and describes the co-presence of positive bittering compounds balanced by sweetness. It is directly related to caramelization, but has inputs from other roast reactions, as well as bittering, chocolatey and have a creamyCreamy is a mouthfeel description indicating thickness and soft, rounded texture. See also buttery. mouthfeelHow a coffee feels in the mouth or its apparent texture, a tactile sensation : A major component in the flavor profile of a coffee, it is a tactile sensation in the mouth used in. Most of this cultivar have fruit that ripen to a red color, hence Red Bourbon, Orange

Spanish 101: Finca is the Spanish word for farm. Sometimes the term Hacienda is used to imply an Estate, which would mean the farm has its own wet-mill. A Finca does not necessarily have a Retana in Antigua) and then there is this lot of El Salvador. It is from a farm I visited last year called El Molino de Santa Rita. The cup has a toasty sweetnessSweetness is an important positive quality in fine coffees, and is one of five basic tastes: Sour, Sweet, Salty, Bitter, Savory (Umami). In coffee, sweetness is a highly desirable quality, and the green bean has in the fragrance, and the wet aroma

In cupping, wet aroma refers to the smell of wet coffee grinds, after hot water is added. It can involve smelling the "crust" (floating coffee grounds) on the coffee, as well as "breaking the crust", has clean fruitedIn some coffee taster’s lexicon, “fruity” means the coffee is tainted with fruit, and “fruited” means a coffee is graced by positive fruit notes. We don't exactly see the difference in terms of these two notes, with a touch of lemon

Lemon notes, as well as other related citrusy flavors or acidities, are prized in coffee. These usually express themselves as a bright accent in the cup, or aromatic citrus aspects, but not as blunt sourness. in the lighter roasts. The cup flavors are bright and crispUsually used as a modifying flavor term, such as "crisp acidity" : Crisp can have several meanings, since it modifies other flavor terms. Crisp acidity might mean bracing, fresh fruit acids. Crisp chocolate notes might at City to City+City+ roast is an ideal roast level that occurs roughly between 425 and 435 degrees Fahrenheit in many coffee roasters with a responsive bean probe where First Crack starts in the 395 to 405 degree, and have honeydew melon hints at Full City roastA coffee that has been roasted to the brink of second crack.: A coffee that has been roasted to the brink of second crack. The internal bean temperature that second crack normally occurs at is. I like the complexity that emerges at FC roast where bittersweet notes mingle with refined, sweet fruit, and extend well into the aftertasteAftertaste refers to lingering residual sensations in the mouth after coffee has swallowed. It might be distinguished from "finish" which is the final sensations of the coffee while it leaves the mouth. Also see Afternose.. Toasty sweetness is present from the start to finishSimilar to aftertaste, but it refers to the impression as the coffee leaves the palate. Aftertaste is the sensations gathered after the coffee has left the mouth. We combine these to form the "final flavor in the aromatics and cup here. It has a great balanceSuggests a harmony and proportion of qualities, and implies mildness since no one quality dominates.: Balance is both an obvious and slippery taste term. It implies a harmony and proportion of qualities, and perhaps a overall, making it a quintessential classic Central American flavor profileFlavor Profile implies a graphical impression of a particular coffee, whether it be an artistic portrait or data graph of the perception of flavor compounds. In the case of our spider graph charts in each.

We also have new cropRefers to fresh shipments of green coffee within the first month or two of the earliest arrivals ... not quite the same as Current Crop, which means the most recent harvest. As a stable dried Indonsesia FloresFlores is an Indonesian island, and as a coffee bears more resemblance to the coffees of Timor-Leste, New Guinea and Java than to the wet-hulled coffees of Sumatra and Sulawesi. It is sweet, with good – Bajawa Highlands, which is an interesting full-bodied cup much like our new lot of BaliCoffee from the Indonesian island of Bali was formerly sold mainly to the Japanese market. Perhaps it is the changing face of world economics that finds the first exports of Balinese coffee arriving under exclusive arabicaArabica refers to Coffea Arabica, the taxonomic species name of the genus responsible for around 75% of the worlds commercial coffee crop.: Arabica refers to Coffea Arabica, the taxonomic species name of the genus responsible. Flores is a small island (360 km from tip to tip) in the Indonesian archipelago around 200 nautical miles East of Bali. Flores was known as Pulau Nipa (Snake Island) before the Portuguese arrived and they renamed it Flores (Flower Island). A very long thin Mountainous land with incredibly diverse terrain, and numerous active and inactive volcanic peaks. The Bajawa Highlands are one of the most traditional areas of Flores. Bajawa is a small town nestled in the hills and is the centre for the Ngada people of this high, fertile plateau. The coffee is grown between 1150 and 1400 meters, which is actually quite respectable altitude for Indonesian coffeeIndonesian coffee is known for its unique earthy, potent flavors. Some like it, some hate it, but it's certainly distinctive. Much of the coffee in Indonesia is processed using the unique method called "Giling Basah," farming. This is not the first time I have cupped coffee from Flores, but it is the first time I found it so (appropriately) floral

Floral notes in coffee exemplify the connection between taste and smell. Describing the taste of a specific flower is near impossible...we always default to “it tastes like it smells” which, admittedly, isn’t the most helpful. , clean in the cup, and pleasantly akin to a good Timor

Hibrido de Timor abbreviated HdT is the interspecies hybrid of C. Arabica and C. Canephora (Robusta) that was found in Timor Leste in the 1940s. It has been the bases of plant breeding for disease or Papua New GuineaPapua New Guinea (PNG) occupies the eastern half of the island it shares with the Indonesian province of Irian Jaya, part of Indonesia. The two primary areas for coffee production can be grouped roughly as wet-processed coffee. It’s not easy to get smallholder farms in remote areas to process coffee carefully; the results from these hinterland growing regions usually reflect this. But here we can really taste the character of the area without defectIn coffee, a defect refers to specific preparation problems with the green coffee, or a flavor problem found in the cupping process. Bad seeds in the green coffee sample are termed defects, and scored against. The dry fragrance

In the cupping procedure for tasting and scoring coffee, this is the smell of the dry, ground coffee before hot water is added. The term fragrance is used since it is normally applied to things is mildly floral and has a foresty 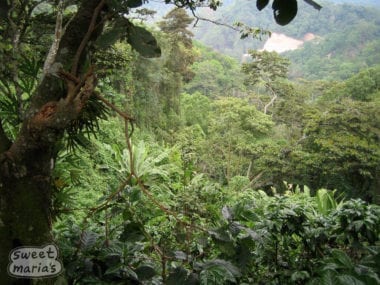 Aroma refers to sensations perceived by the olfactory bulb and conveyed to the brain; whether through the nose or "retro-nasally": The aromatics of a coffee greatly influence its flavor profile and come from the perception, and that comes through in the cup, but more like a good East Timor than like a funky, earthyEarthy is a flavor term with some ambivalence, used positively in some cases, negatively in others.: Sumatra coffees can have a positive earthy flavor, sometimes described as "wet earth" or "humus" or "forest" flavors. But There’s a huge difference between the City to City+ roasts here (nutty

There are several types of Abyssinia, but they are not from Ethiopia but rather Indonesia. Abyssinia 3 = AB3.  PJS Cramer, a Dutch plant researcher, introduced this variety in 1928, supposedly from Ethiopia seed stock. It was come to mind … but much more balanced than the later with a good range from bass to treble in the cup. ï¿½