We have not offered coffee from Myanmar (formerly Burma) for many years now. In fact after the one offering we had from all the way back in 2000.  Much has changed of course but along with the tides of politics, we see different initiatives to improve the quality of Myanmar coffee, and make it more available.

The region has produced Robusta 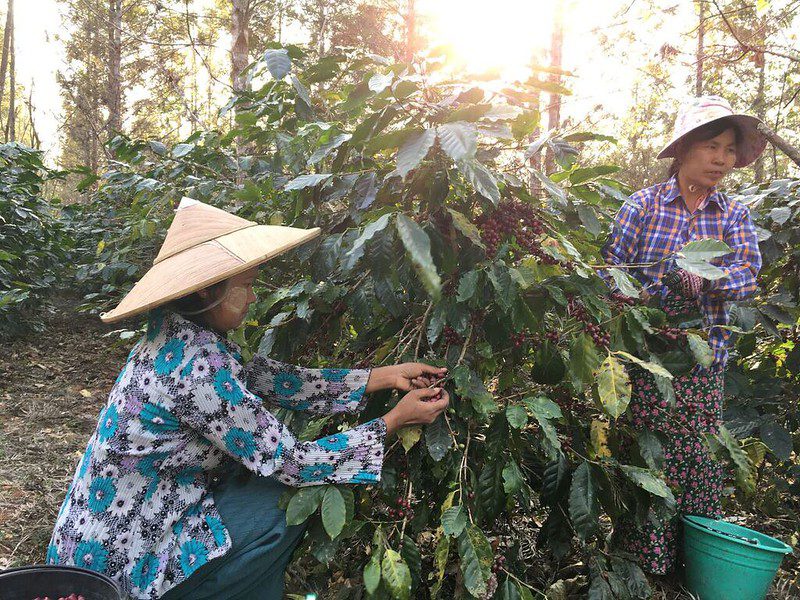 Specialty coffee from Myanmar is still relatively new in the US marketplace.

Our first-hand experience with Myanmar coffee rates the cupping

Acidity is a positive flavor attribute in coffee, also referred to as brightness or liveliness. It adds a brilliance to the cup, whereas low acid coffees can seem flat. Acidity can sound unattractive. People may More and most of the cup character being about the roast level.

Sadly, Myanmar has been under authoritarian rule until recently, and with glimmers of independence and transparencyTransparency is a flavor characterization synonymous with clarity. It is also a business ethics term, implying that as much information as possible about a product is made available to the consumer, and the producer as More, has lapsed back into uncertainty. There were great civil rights questions looming in relation to the military powers and the ruling elite. One might assume that consuming products from Myanmar might prolong the despotic rule, and in some cases this might be true. We didn’t ask these questions back in 2000 when we had our first Myanmar coffee, which came from Royal coffee if I remember right. I wish we had, because an export good like coffee in 2000 likely came from the military, and funded the military or some form of corruption.

But this was the same case in Timor

Hibrido de Timor abbreviated HdT is the interspecies hybrid of C. Arabica and C. Canephora (Robusta) that was found in Timor Leste in the 1940s. It has been the bases of plant breeding for disease More, where money from the organicGrown without the use of artificial fertilizers, herbicides, etc.: Organic coffee has been grown according to organic farming techniques, typically without the use of artificial fertilizers. Some farms have more local Organic Certification than the More coop directly aided the coffee farmers and circumvented the occupying Indonesian powers. Later we had Myanmar from a coop called Golden Triangle, after the coffee regionRegion denotes a coffee-producing area, a more specific zone within the country.: Region is a more specific area within the country. Arabica coffee grows roughly between the Tropic of Cancer and the Tropic of Capricorn. More encompassing 3 Asian nations. It was supposedly a USAID project…

Mandalay and Shan State produce the majority of the coffee in Myanmar, but recently other regions (Chin State and Kachin State) have also started growing coffee.. In Mandalay, most of the farmers own large estates, and produce washed coffee. Shan State producers are almost exclusively smallholders, most of whom own less than a hectare of land.

Several groups are at the forefront of Myanmar’s specialty coffee

Specialty coffee was a term devised to mean higher levels of green coffee quality than average “industrial coffee” or “commercial coffee”. At this point, the term is of limited use, since every multi-national coffee broker More movement, including the Mandalay Coffee Group (MCG) (a wet and dry millA facility that accepts dried coffee cherry and mechanically separates the coffee bean from the dried fruit and parchment layer. The facility can be highly mechanized, as in Ethiopia, or very simple, as in Yemen. More, export company, and consortium of 50 estates estates in Mandalay), Amayar (a wet and dry mill and exporter in Ywangan owned and operated by Daw Su Su Aung), Shwe Taung Thu (a consortium of 19 villages in Ywangan who produce naturals almost exclusively), and Behind the Leaf (a wet and dry mill and exporter in Pinlaung).

We rarely stock this originIn coffee talk, it refers to a coffee-producing region or country; such as, “I was just at origin.” Of course “Origin” for most product we use is not a beautiful farm in a temperate climate, More, but click to see if we are currently offering Myanmar Coffees at Sweet Maria’s.

We have not yet traveled to Myanmar, so the images are courtesy of the supplier Atlas coffee.

The Rohingya are an ethnic minority group, who largely live in Rakhine state. Rakhine state is in the west of Myanmar and shares a border with Bangladesh. Most Muslims in Myanmar come from the Rohingya ethnic group. The Rohingya have their own language and culture and many live in Bangladesh, on the other side of the border. The Rohingya in Myanmar view themselves as Burmese and say they have been in Myanmar for generations. The Myanmar government view them as illegal immigrants from Bangladesh and do not recognise them as citizens of Myanmar.

The crisis is the latest manifestation of a turbulent relationship between the Rohingyas and the Burmese government.  In February 2017 the UN published a report condemning the actions of Myanmar’s army against the Rohingyas. By August 2017 nearly 800,000 Rohingyas had been displaced and were temporarily living in Bangladesh. The conflict continues and up to now no solution has been found.

Recently, general restrictions on rights and free expression has been at stake, and greater civil disturbance in protest has been in the news. Unrest always hurts farmers, through land conflict, lack of security, and disrupting the market for their product. We hope to see this pass, and enter a stage of progress for the farmers, and the non-farmers, of Myanmar.

We rarely stock this originIn coffee talk, it refers to a coffee-producing region or country; such as, “I was just at origin.” Of course “Origin” for most product we use is not a beautiful farm in a temperate climate, More, but click to see if we are currently offering Myanmar Coffees at Sweet Maria’s.