Tanzania has diverse coffee growing regions and a well-established name ... but what about quality?

With the stately and scenic Mount Kilimanjaro marking the coffee-producing lands of the North, and beautiful Lake Tanganyika in the South, it may seem remarkable that Tanzania coffee can remain in the shadows to that of any other land. But when you neighbor Kenya, the powerhouse of coffee in East Africa, it’s not only possible, it is likely.

A mixed history of false-starts in coffee production, the unsure agendas of German and English colonial rule, priorities for other food crops, and unfortunate loss of coffee trees from plant illness has held Tanzania from its coffee potential, in both volume and cup quality.

But Tanzania, when well-processed, can have Kenya-like bright notes, unique fruited flavors, and cooked sugar sweetness. Tanzanian coffees can be lovely indeed.

Potential and Problems in Tanzania

That potential glimmers on the horizon, sometimes achieved by the highest-grown Estates and small-holder Cooperatives. But sometimes the quality is lost in translation … or more precisely, in transit. The Tanzania coffee character is typical of East African washed (wet-processed) coffees: It is generally bright (acidic), and almost aggressively flavorful. Lack of balance can be an issue sometimes, but the main risks are faulty flavors from bad fermentation, and storage or transit damage. The abundance of bureaucracy around coffee exportation, especially when you try to do something milkly innovative like a shipment of mixed micro-lots, can result in coffee stuck at the sweltering hot port of Dar Es Salaam. Even hermetic packaging like Grainpro-lined jute bags, or vacuum packing, does not prevent damage to the cup quality of coffee under these conditions.

Coffee is grown in the North and South zones and there is good quality potential from both areas, although buyers are more familiar with the northern Kilimanjaro and Meru coffees from around Arusha and Moshi. There is also potential in Kigoma area near Lake Tanganyika. The Kagera area near Lake Victoria is a robusta growing zone, with coffea canephora making up some 25% of all coffee grown in Tanzania. In the south, Mbinga in the Songea area has produced a solid cup, and the drier Mbeya region is perfect for coffee growing and processing.

Coffea arabica came to Tanzania with Jesuits and German colonization, and it was likely quite similar Bourbon varieties still grown to this day. Original strains of coffees from the isle of Bourbon (now Reunion) were distributed through East Africa in this period, sometimes named for missionary groups who brought them such as French Mission Bourbon or Scottish Mission Bourbon. Kent variety was brought from India, but is rare to find in production. Newer hybrids are N39, which is distinctly a Bourbon-type in its form, and the lovely-named KP432. Would you like a delicious cup of KP432 this morning?

TACRI, the research institution in Tanzania, has aggressively developed new varieties to improve disease resistance and increase yields for the farmers of Tanzania. We hope new varieties will cup as well as the old Bourbons, and not include the problematic Robusta genetics that come with Catimor types. That’s a tall order though. Coffee fungus diseases and coffee wilt are serious issues in Tanzania, as well as imbuing seedstock with drought-resistant characteristics. While coffee is an important crop and accounts for 20% of export income, water for sustenance crops and for humans is more vital to the health of the people!

A Place for Peaberry

Peaberry from Tanzania has had a unique marketing niche in the United States, and I am not sure why. Peaberries are often sorted out and sold at premiums here over what they can get other places, but the cup is sometimes tainted and not worth the price. There is no inherent quality in a peaberry because of its shape, although the roast dynamic is different and (I feel) benefits small home air-powered roasters. Peaberries occur more in plants with poor nutrition, deformed roots, or those stressed by other factors like lack of water in the maturation stages (a big problem in parts of Tanzania). But the quality issues arise mostly in that a peaberry bulk lot is often collected from many growers over an extended period of time, meaning a mix of the good and bad, the freshly harvested and the older coffee waiting to be bulked up. That’s not a great prelude for success in the cup.

We are now working direct in selecting specific cooperative and small estate coffees first hand in Tanzania, primarily because our in-country partners have done the footwork to provide us that capability. In the past, nearly all coffee had to be traded through the weekly auction run by the government’s Coffee Board. And even if they could find buying partners who would pay more, for financing reasons, regulations and tradition, many fine coffees were sent to auction only to end up bulked for more commercial full-container sales.

See our current selection of Tanzanian Coffees at Sweet Maria’s.

Tanzania Articles in Our Coffee Library 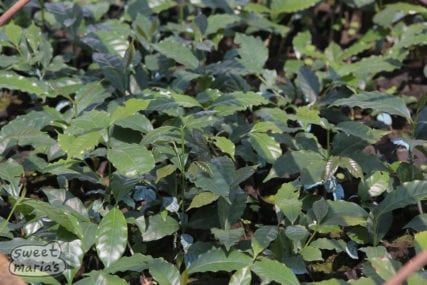 The Mania of Tanzania: The Tanzanian Coffee Trade

Isende Group Tanzania
Farmers and workers at the Isende group, Mbeya
Coffee cherry
Fresh picking of coffee at Isende FBG
Kanji Lalji Grafted Nylon Coffee
Eliot Swila, assistant estate manager. Kanji Lali Estate, propagating N-39a - Mbozi compact on top of Mbozi old variety, called Nylon locally.
Malingale Farmer Group
Old Mbozi Mission cultivar that was broght to the area, likely a Bourbon type coffee. Tanzania
Igamba Fine Coffee, Mbeya
Michael the kenyan agronimist in dark hat. Rashid Dunken Siwale in tan hat, largest member of Igamba
Tembo Coffee warehouse, Mbeya
Getting lots organized at a local warehouse in Mbeya
Orderly Planting
Trees in neat rows, Igamba Fine Coffee, Mbeya
Kanji Lalji Estate, Mbeya
Kanji Lali Estate, propagating n39a - mbozi compact - shoots for grafting, not from seed
Impromptu Meeting
We had a discussion among the trees while the family was harvesting their plot. They are part of the Isende group. Sadly, I couldn't understand because I dont speak Swahili!
Sorting drying coffee
Hand sorting coffee on a genuine authentic african bed. Igamba Fine Coffee, Mbeya
Explosion of Coffee Flowers
These flowers will only last 3-5 days on the tree before they wither. Mbozi Mission variety, in full flower. Irrigation means even and synchonous flowering which results in more even fruit set and more uniform cherry ripeness.
Cruising
Tanzania style, shade protection on a moto-taxi. Mbozi area
70 year old coffee tree trunk
Old Mbozi Mission cultivar, Malingale Farmer Group
Friends Forever
At a coffee collector coffee in a village nearby, the trader re-dries coffee he buys. But he does it too fast, so he can sell it fast and get his money back. Not good for quality. But his kids are cute!
Near Isende, Mbeya
Old Mbozi Mission variety is the original type of Bourbon coffee planted in this area. The clumbing fruit set hints at the fact it is Bourbon.
Isende FBG
Repairing the Penagos pulper at the farmer business group, Isende
Rungwe Coop
Parchment coffee looked good but the cupping was rather bleh.

2014 Was the First Year we Worked Direct in Tanzania…

We selected lots in Tanzania with the help of exporters, visiting the farmer groups and estates that cup well, and thinking ahead to longer term relationships. In part this is possible because the Coffee Board allows direct sales now; every coffee lot is not required to go through the auction. And secondly, we have found some good partners on the ground who understand quality. While it means we take greater risk on the coffee delivered to us, having exporters in the country who are clear about the expectation of cup quality, and are taking steps to mitigate the short-comings of the “usual way” coffee is handled, means it is a good time for me to take a more active role in sourcing in Tanzania.

With the coffee we are bringing in this year, the farmer receives prompt payment for parchment coffee delivered to the warehouse at fair local price level. Then when the coffee finds a buyer who pays a premium, there is a second payment distributed to all farmers in the group. That can go toward household needs, educating the family, wherever the need is. But in the off-season there is also targeted assistance to improve the health of the coffee shrubs, improve the wet-mill, and dedicated assistance from an agronomist. This means motivated farmers, who have an increasingly better chance with each harvest of improving their yields, producing coffee that scores better in the cup, for which we will pay more … a much more positive cycle for them, and great coffee for us, now and in the future.

See our current selection of Tanzanian Coffees at Sweet Maria’s.