Frank Sinatra sang, "They grow an awful lot of coffee in Brazil." It is unquestionably true!

Brazil is the largest producer of arabica coffee and not a small amount of robusta too. Brazilian coffee is nutty, sweet, low in acidity and develops exceptional bittersweet and chocolate roast tastes. There’s a long tradition of roasting Brazil in the United States. Brazil is roasted and sold as a single-origin coffee — by region, cooperative or Fazenda — but it is often used in blends for the sake of cost control.

Brazil coffees are common in espresso, both in high-end blends and in commercial coffees like Dunkin Donuts. Even the broken fragments of beans and the dust from the dry mills is sold, ending up in some awful coffee product somewhere, most likely instant. But there is quality coffee Brazil, it just takes some good relationships and cupping work to find.

Brazil Joao de Campos Shade Drying
Drying yellow caturra lot, under shade netting.
Scale, Large, Brazil, Patio
A drying patio in Brazil, its like 10 farms put together in Central America!
Washed coffee
Parchment coffee in Brazil - not often seens as most coffee is natural or pulp natural - called Cereja Descascada.
Dried on the Tree in Brazil
Brazil is one of the few areas I have seen where coffee actually dries on the tree in some cases.
"Coffee Selection"
Indiscriminant strip picking of coffee as well as machine harvesting means that everything ends up together. It's up to the train home to improve the quality. It's backwards from everywhere else in the coffee world.
Natural coffee, lower quality type
Lower quality brazil natural coffee takes time to dry and might become mossy or moldy in the meantime. Naturals need more care.
Vintage VW bus or ?
Brazil produced Volkswagen vans for many years after they were retired in other areas.
Cocarive Dry Mill in Carmo de Minas town, Brazil
Tubes to feed grading and milling machines at the warehouse. Carmo Brazil
Cocarive Dry Mill in Carmo de Minas town, Brazil
Huge coperative warehouse in Carmo Brazil.
Bruno and Ensei
Cupping in Patrocinio Brazil, a local competition to find the best area coffee - Minas Gerais
Machine cherry seperator
Fazenda Conquista, Fernando's farm, near Maria de Fe
The Machine Seperater for leaves/sticks and coffee cherry
Fazenda Conquista, Fernando's farm, near Maria de Fe, Brazil
Fazenda Furnas near Pedralva
A modified motorcycle rakes the coffee on the drying patio, Fazenda Furnas. Carmo de Minas Brazil
Fazenda Conquista Mechanical Harvesting
Using a hedger to cut off all the branches of the coffee tree, with the cherry on them, then separating cherry by machine. Yes this is coffee harvesting.
Winnowing hand picked coffee in Minas Gerais Brazil
At, Fazenda do Serrado, winnowing coffee to remove leaves and sticks. Carmo de Minas Brazil coffee farm
Gas station / Cupping room
Hot water dispensed from something between a gas pump handle and a pressure washer. Cupping in Pedralva lab
Fazenda Sertao, Carmo de Minas
Tree dried natural, or nearly that. Cherries sometimes dry before they are picked in Brazil!
Transporting coffee from pulper to Patio
Fazenda IP, Carmo de Minas, Luis Paolo Dias Pereira - Transporting coffee from pulper to Patio
Coffee pulping
Coffee coming from pulper at Fazenda IP, Carmo de Minas, Luis Paolo Dias Pereira
Coffee farm Brazil
Sitio da Torre farm from a visit years ago!
Varginha, the ET
Hanging out with the ET, in Varginha Brazil - the Area 51 of South America.
Mechanized harvester in Brazil
A harvesting machine to bring in the coffee harvest in Cerrado, Minas Gerais.

There’s the big push on behalf of Brazilian coffee growing associations to create the image of their coffees as a distinct flavor profile, but there just isn’t the extreme distinction that identifies one Brazilian coffee from another. Attention to good farming and processing techniques has helped, but the coffee is grown at lower altitudes than most Specialty coffee, in poor quality soils, in open areas that were often originally grassland (a reason why the “shade-grown” criteria really doesn’t apply much to Brazil).

What is true with Brazil is true with all other coffee-producing origins as well. People outside the coffee trade want clear distinctions about quality: Is Brazilian coffee good? Those within the coffee trade are happy to provide the answer roasters and consumers want to hear: “Yes- it’s good!” But the question itself is flawed. Every origin with the capability to produce good coffee can produce horrible coffee as well. Farms side-by-side can produce differing qualities of coffee, and within the a single farm or cooperative there is a full spectrum of coffee cup quality. The real question is to ask is whether each lot tastes good, where a “lot” means one batch of coffee processed through the mill. That question is answered in comparative cupping of the coffees for taste quality.

As far as Brazil goes, the issues are complex. Here is a country that produces relatively few containers of coffee that truly cup from 84-87 points, and a staggering quantity of coffee that cups below 80 points, commercial-grade coffee. As far as coffees that are truly 88+ points, I feel this is not only rare from Brazil, but nearly impossible, given the varietals and bean density. Yes, relative to other Brazils and the classic flavor profile of these lower grown, soft coffees, they can go higher. But on a global scale, can a Brazil reach the ranges of the best Ethiopia, Kenya, Colombia or Guatemala wet-processed coffees? I don’t think so.

Then again, Brazil coffees are solid, crowd-pleasing coffees with outstanding body, and nut-to-chocolate roast tones. They also appeal to the palate than finds acidity, the flavorful brightness in better coffees, somehow annoying. And nothing touches a really good Brazil coffee as a base in espresso blends, for the ease with which they produce good physical characteristics (mouthfeel and crema) as well as nice base flavor.

See our current selection of Brazilian Coffees at Sweet Maria’s. 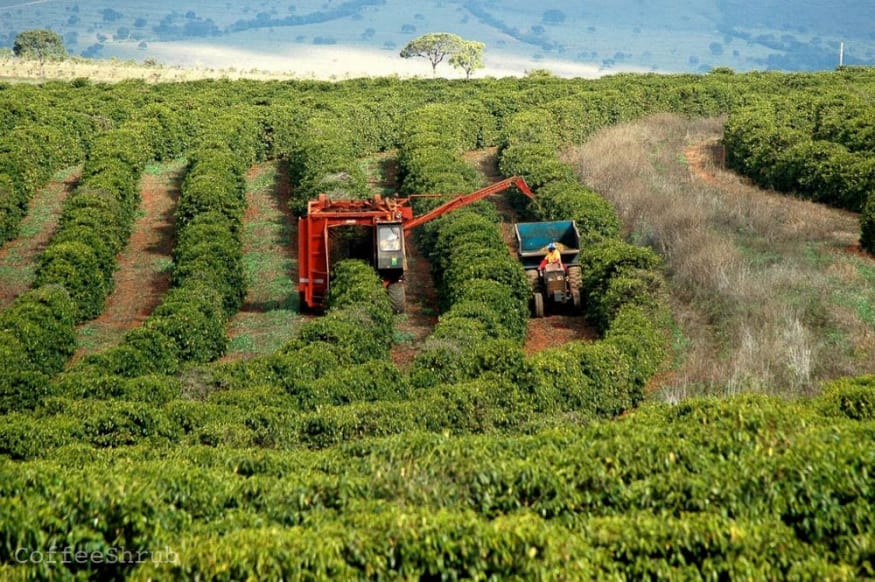 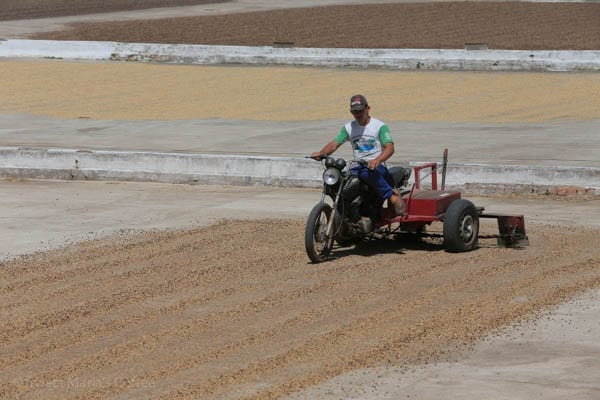 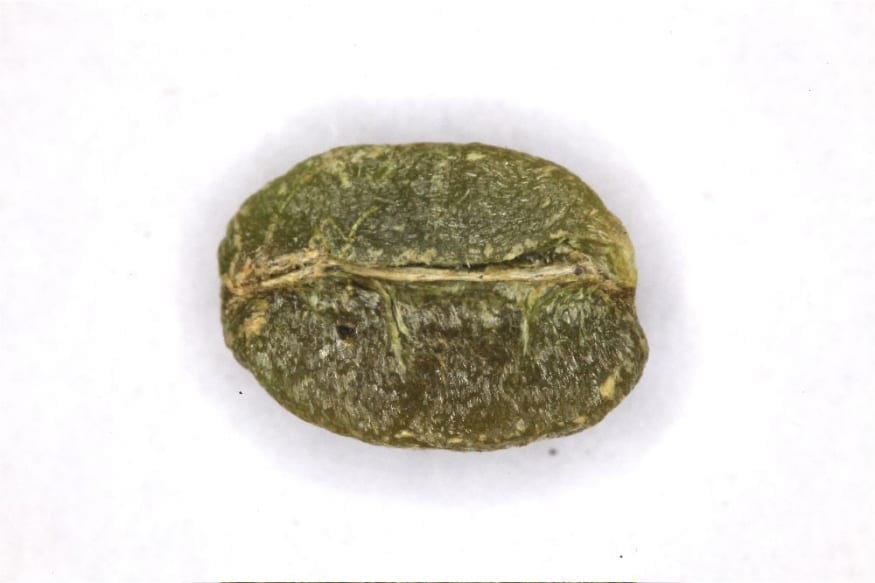 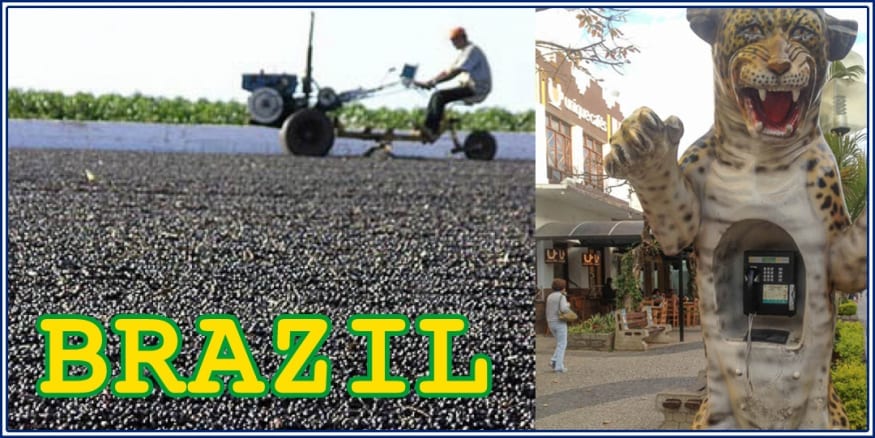 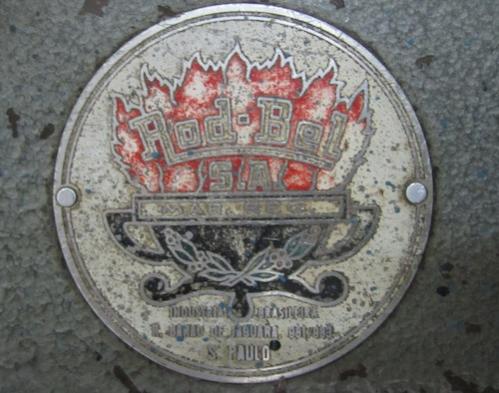 An Approach to Roasting Brazil Coffee 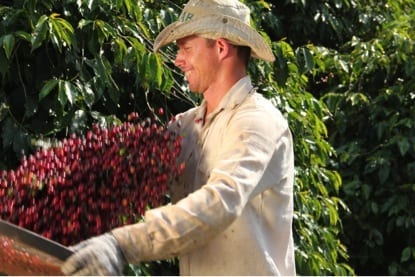 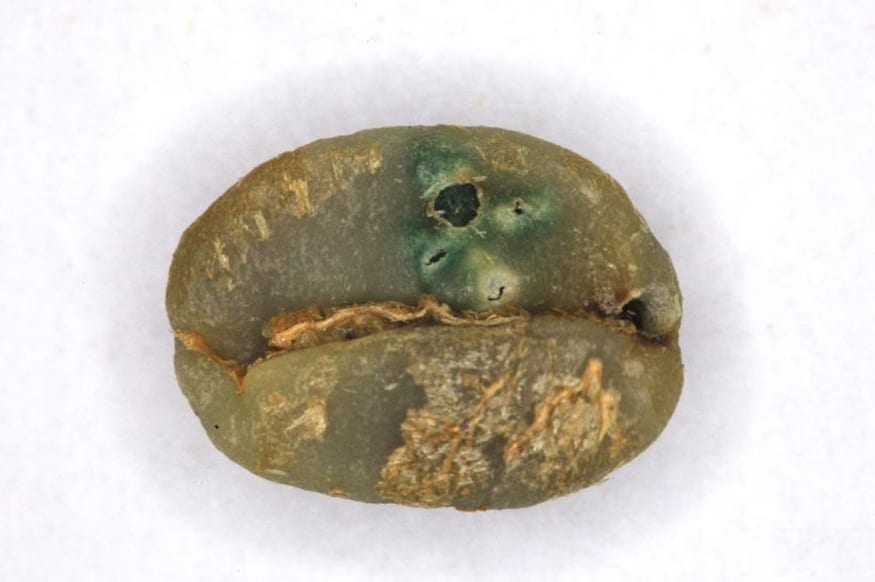 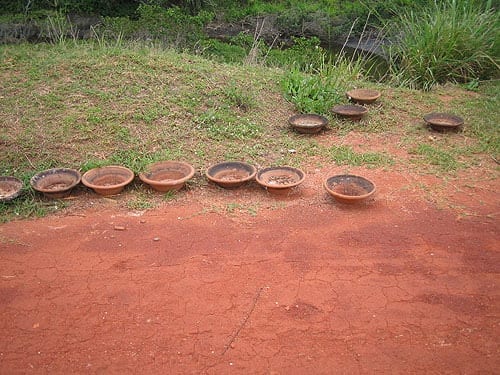 Brazils are not complex coffees, and don’t have impressive acidity that adds a vivid brightness to coffees from higher-grown areas of Guatemala, or Ethiopia. But Brazils are a different sort of beast than those origins. Brazils are not dense coffee seeds: they are grown at lower altitudes than Central American coffees. Hence the very dark roasts of Brazil coffees pick up ashy, bittering flavors. For espresso, you can roast Brazils lighter, separately, or keep the entire blend at a Vienna roast or lighter.

There are 3 methods of processing Brazil coffees of interest to us; Dry- Process (Natural), Pulped Natural, and Semi-Washed. They produce different types of cups. The Natural has great body, chocolate, possibly fruity notes … and it risks being earthier and more rustic in the cup. The Pulped Natural is created when the coffee cherry skin is removed and the parchment, with much of the mucilage attached, is sun-dried on patio or raised drying bed. This coffee cups like the more like Natural coffee, but is a bit cleaner in the cup. The Semi-Washed uses a demucilager machine to remove the skin and the mucilage. The Semi-Washed ranges in character from being close to Pulped Natural in flavor profile, to being similar to a wet-processed coffee (clean cup, uniform, less body, less chocolate, a bit brighter).

I like good naturals and pulped naturals (called cereja descascada in Brazil). They have more intensity, produce more crema, but I have to cup them rigorously to watch for defective cup character. On the other hand, really clean Semi-Washed, where a lot of the mucilage is removed, do not have typical Brazil character to me. Yes, these coffees score higher and they are now totally dominating the Cup of Excellence competition. But if you want a cleaner, brighter cup, the standard is set elsewhere, not Brazil. Go buy a good Central American coffee.

For espresso, I used to employ natural Brazils in blends, then changed them in favor of more consistent (and less quakery) pulped naturals. Now we only use Brazils in a couple blends, and I could imagine a day when we don’t use any! The coffees are soft (the opposite of dense) and can lack the kind of sweetness we hold dear in espresso.

Roasting Brazils is a Challenge

The trick is that Brazils prefer a lower initial roast temperature and can turn quite ashy tasting when roasted too dark. My personal preference is that Brazils for espresso are rested quite a while after roasting — in fact I had a straight pulped natural I roasted to a light Vienna for espresso, and I kept testing the cup because 2 days after roasting it was too lively, nippy – almost like a baking soda effect on your tongue. After 18 days it became one of the deepest. heavy bodied espresso I ever had! I am not saying coffee should be rested that long after roasting (especially other methods like French Press, Drip etc, which fade after as little as 7 days!), but if you don’t have a good initial experience with a Brazil espresso, don’t toss it – try it after a week, or even two. As far as the type of Brazil, Illy is said to use 100% pulped natural and semi-washed.

Most quality Brazil I have found comes from the Sul de Minas: Carmo de Minas, Cerrado and Matas de Minas. Cerrado region is, apparently, not a name many Brazilians recognize … at last not those I have spoken with. Cerrado is a savanna-like area, dry and flat, in Minas Gerais state. They produce a lot of coffee, and there are some un-blended single farm lots that are good. Two micro-regions in Cerrado were of special interest to us: Chapadao de Ferro and Serra do Salitre. Now we focus efforts to the southeast of there.

People ask me about “Santos” coffee: Santos is a port, not a producing region. Coffee labeled Santos is pooled from market-grade lots and the lowest common denominator expresses itself as the primary cup character.

See our current selection of Brazilian Coffees at Sweet Maria’s.