Coffee is now farmed from Nimbin and Lismore, in New South Wales, to Cape York in far north Queensland where the large Skybury plantation is located. Skybury and the other larger plantations, near Mareeba on the Atherton Tablelands, are fully mechanized, but there are smaller farms where traditional hand cultivation is used. 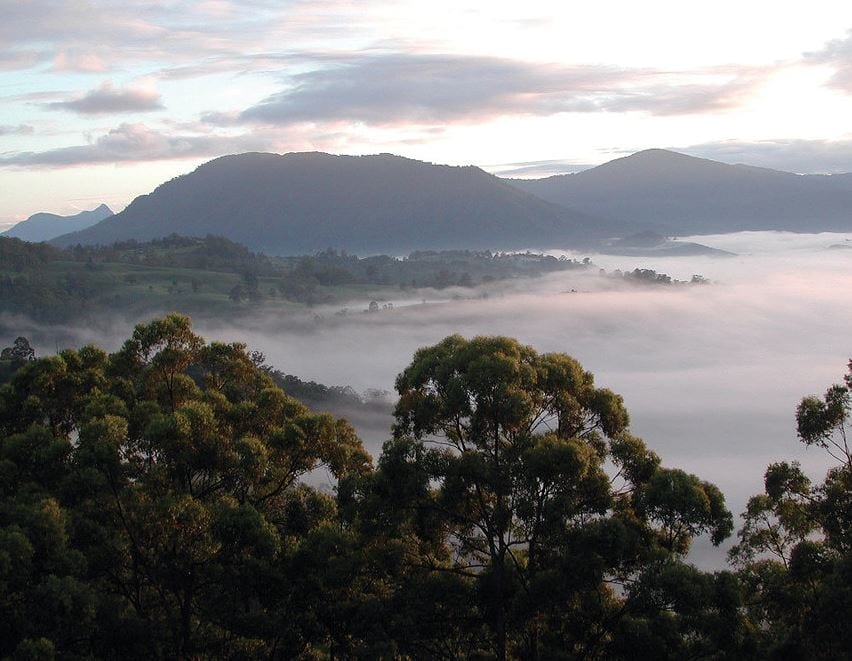 It is said that coffee was first planted in 1832 in Australia! When coffee cultivation was re-started in the 1980s, initial plantings were based on the local cultivar Kairi Typica, as well as Bourbon, Arusha, Caturra and Blue Mountain imported from PNG. Yields were disappointing though, and unfortunately the farmers were putting yield above cup quality.

Some newer cultivars have now been evaluated by QDPI and NSW Agriculture. The recommended cultivars for northern Queensland include Catuai Rojo, K7, SL6, Mundo Novo, Catuai Amarillo and Kieperson. For the cooler subtropical areas of northern NSW and southern Queensland, K7 and SL14 are preferred for warmer sites, and a local selection CRB is suitable for cooler locations. Hopefully, we will see small farms specialize in traditional cultivars in the near future.

An Australian magazine, Bean Scene, wrote about the earlier origins of Australia’s coffee farms: “Many believe, however, that coffee in Australia was first found planted on the shores of Kangaroo Point in Brisbane in 1832 – admittedly not the greatest area to grow, but according to Coffee Works in Mareeba and the Australian Government’s Rural Industries Research and Development Corporation, the first. It wasn’t until the 1880s that it started to spread along the east coast and down to the fertile plateau of northern New South Wales, marking the beginning of commercial plantations in Australia.

It was around this time Australian crops started winning medals all around Europe and a reputation for vibrant growing conditions in the country began to emerge. The market took somewhat of a financial nose-dive soon after, due to rising production costs and a lack of “coffee slaves” available to pick the beans. Australian coffee fell off the radar and the growing business lay dormant for nearly 100 years until increasing global interest started to breathe life into this industry once left for dead.”

Australian Coffees are Mild in General …

How do you classify Australian coffee by it’s flavor? Well, it bears resemblance in the cup to the soft, lower-grown “Island Coffee” flavor profile, so I have stretched the description a bit out of whack. Coffee cultivation began in Australia in 1880 in earnest and continued through 1926, but was found to be generally unprofitable, and the quality of the coffee was poor. It was re-established in the early 1980’s in much the same areas as the original plantations on the Eastern coast in New South Wales up to Queensland.

While there are quite a few backyard farms, the exported coffees are from larger operations. But the capacity to export is 100 tons, and Australia imports more than 50,000+ tons. So Australia production versus consumption is minimal.

Does it make sense to produce coffee?

Overall, I waffle on the prospects of Australian coffee that breaks any barriers in terms of cup character. Mountain Top has certainly been my pick in blind cupping versus the northern coast coffees. Have we seen the potential of Aussie coffee, or is there more this origin can offer? The jury is still out. We have not had this origin for many years now. Vacuum packing seems to have greatly improved the quality of the cup since the long transit time from Australia can effect cup quality.

But given the cup quality, the rather low-grown taste, and the high price, it’s difficult to see the value of bringing Australia coffee to the United States. And the big question is whether it makes any economic sense to grow coffee in Australia at all. What does the per Lb or Kg price have to be to the consumer to make it work for the farmer? Likely, more than consumers are generally willing to bear.

Click to see if we currently offer any Australian Coffee at Sweet Maria’s. Chances are … no!