It was easy at one time to be cynical about Hawaiian coffee.  It’s value was not intrinsic, not due to its flavor quality, the fact it tasted good. It had value by association: folks had a nice vacation and wanted to bring something back to relive their Aloha experience.  While that still may be the case, and there is certainly low quality coffee sold to tourists in this manner, there is also many people dedicated to making Hawaiian coffee as good as the price would suggest it should be!

The range of coffee wrapped in a bag that reads “Hawaii” is still there, from high to low quality. Some of the growing regions are so low in altitude they are nearly in the tidal zone. The coffee is mild (sometimes too mild). It can be terrible and flat, or it can be mildly nice! The best coffees cost a lot and the worst cost way too much.

Kona is still the center of Hawaiian coffee, but …

We had occasionally offered coffees from Maui, Molokai, and Kauai. But these are not usually grown like true small farm EstateA “coffee estate” is used to imply a farm that has its own processing facility, a wet-mill. In Spanish this is called an Hacienda. A Finca (farm) does… grade coffees from the Big Island, nor do they taste like them. Kona isn’t grown at impressive altitudes compared to other coffee origins, but on Maui and Kauai coffee is grown at exceptionally low elevations, sometimes near tide pool level! Also, much Kona is an older coffee variety

Hibrido de Timor abbreviated HdT is the interspecies hybrid of C. Arabica and C. Canephora (Robusta) that was found in Timor Leste in the 1940s. It has been…, TypicaA coffee cultivar; a cross between Typica and Bourbon, originally grown in Brazil: Mundo Novo is a commercial coffee cultivar; a natural hybrid between “Sumatra” and Red Bourbon,…, a traditional type that cannot be grown at the lowest elevations. Recently, we found out that Ka’u coffees have come a long way, and can be excellent. So Ka’u is a region with credible quality potential.

In a historical sense, coffees like Kona are the pinnacle of a particular definition of what “good coffee” is: clean, pleasant, mild, good aftertaste. This is a notion of “good coffee” handed down from a time when low-grade coffee was called BrazilBrazil is a coffee giant . As Frank Sinatra sang, “they grow an awful lot of coffee in Brazil”.: Brazil is a coffee giant . As Frank Sinatra… Rio and it had a seriously foul, dirty taste (so distinctly awful it is still called RioyA defect term referring to harsh, acrid, medicine flavors from Brazilian coffees of the lowest order; named for Rio de Janeiro. Result of continued enzyme activity when coffee… in defective coffee terminology). The best coffees were considered the polar opposite; island coffees — mild, delicate and clean.

Certain exotic coffee origins we appreciate as intense and unusual flavor profiles, such as Yemeni coffees, Ethiopian Harar, and wet-hulled Sumatras for example, would be considered defective in this definition. If you love those intense coffees, Kona may seem too timid, too simple, too mild. With scores in the mid-80s, they don’t rate like the best Kenyas or Ethiopias, but the descriptors indicate balanceSuggests a harmony and proportion of qualities, and implies mildness since no one quality dominates.: Balance is both an obvious and slippery taste term. It implies a harmony… and clean cupClean cup refers to a coffee free of taints and defects. It does not imply sanitary cleanliness, or that coffees that are not clean (which are dirty) are… quality. Consider this when you taste good Hawaiian coffees.

The famously fragile ecology of HawaiiThe Kona district on the big island of Hawaii produces the best coffee from this state – clean, sweet and mild. : Ah, Hawaii… what a nice place…. has been shattered; along with other invasive species and insects, the recent appearance of Broca, the Coffee Berry Borer insect, has had a huge negative effect on the farms of Hawaii. And coffee fungus is having it’s impact too.

Coffee is being downgraded before export, and can’t fetch the prices it used to as an Extra Fancy grade when it gets knocked down to Kona No. 1 Grade. The affected beans do affect cup quality, but can be sorted out. Yet this takes labor, and in an expensive market that is just not feasible.  Hawaiian coffee costs a lot because there is no cut rate labor … if the world had universal labor laws then all coffee would be priced like Kona etc. We think that’s the direction it should go, and coffee should be treasured while farmers are fairly rewarded.

Hawaii References in Our Coffee Library

History of Hawaiian Coffee and Kona Coffee in the Modern Day 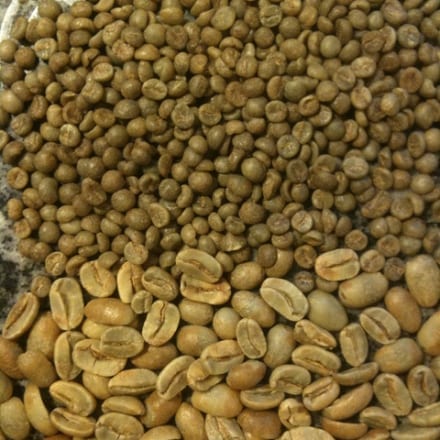 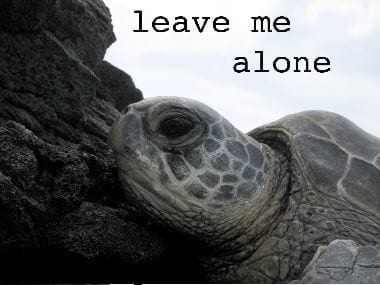 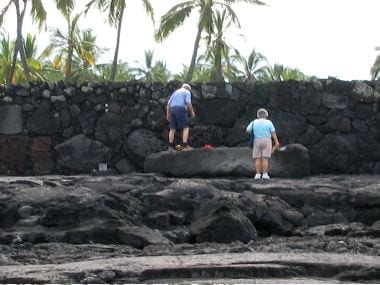 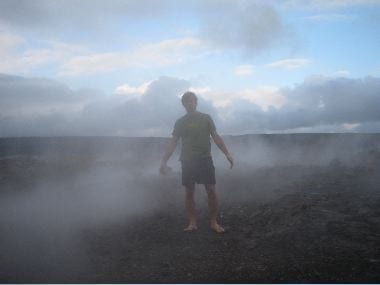 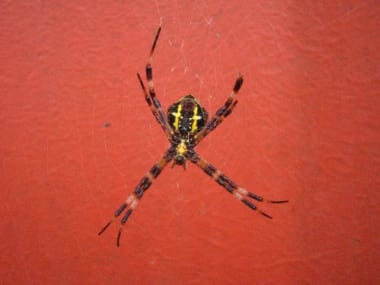 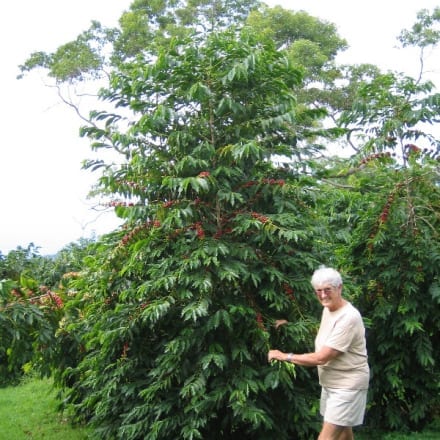 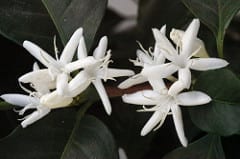 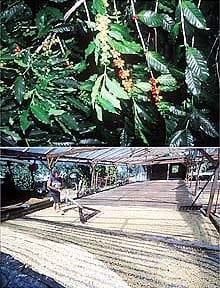 From the Volcano, the Rarest Brew: Kona Coffee

I must admit that we have been out of the loop on Hawaiian coffee. Our old sources have retired or sold their farms. Newer operations can sell direct to customers, and good for them! Large operators still sell volumes of coffee, but they aren’t great quality from my experience.

We used to sell coffee produced by family farms that produced a decent volume, and didn’t want to bother doing a bunch of marketing and retail. They wanted to farm coffee, and that’s it. We hope to create new long term connections, and are encouraged to see the hard-working small farms roasting and selling coffee direct. But our reality in our cupping

Cupping is a method of tasting coffee by steeping grounds in separate cups for discrete amounts of ground coffee, to reveal good flavors and defects to their fullest…. lab is to focus on where we find the best quality cup, so the energy we expend on sourcing from regions in … say, Ethiopia

Ethiopia is the birthplace of coffee: it is in the forests of the Kaffa region that coffee arabica grew wild. Coffee is “Bun” or “Buna” in Ethiopia, so…, doesn’t leave us with much capacity to seek the finest small farm coffee from Hawaii.

The other confession is … we are kinda cheapskates I guess! We want to offer our customers a good value. Hawaiian coffee can be a tough proposition in those terms, when setting up these cups on a global stage. Hawaii Vs KenyaKenya is the East African powerhouse of the coffee world. Both in the cup, and the way they run their trade, everything is topnotch.: Kenya is the East… Vs ColombiaColombian coffee is highly marketed and widely available in the US. They have been largely successful at equating the name Colombian Coffee with “Good” Coffee. This is half-true…. Vs GuatemalaGuatemalan coffee is considered a top quality coffee producer in Central America. Due to our proximity to Guatemala, some of the nicest coffees from this origin come to… Vs Ethiopia, in a blind cupping. Tough competition there.

I want to see farmers get $50 for their 12 ounce bag of Hawaiian coffee. Coffee is hard work. But if I am going to buy 2000 lbs of Hawaiian coffee, and have to sell it to our customers at prices that are 10x a fantastic Ethiopian lot, it’s got to also be amazing. That’s a tall order. I think small farms that sell direct to customers are offering something we cannot, that direct connection, and that makes the $50 for nice coffee worth it for those involved. Just like any produce in a farmers market, there’s that extra value. And there’s the way you are putting consumer dollars into farmers pockets …which is fantastic!

More on Hawaii: Our article detailing some history of Hawaiian coffee

Older coffee trees, Kona
Tall Kona coffee trees from a visit some years back!
Kona coffee cherry
Clusters of Kona coffee cherry from the competition event I attended some years ago.
Typica in Kona Hawaii
Old Kona Typica variety coffee with elongated bronze tip leaf.
mixed blessings
Here you see a typical mix on a single branch of coffee ready to pick (some that REALLY needs to be picked, that is, turning dark crimson) while other is yellow-green and will ripen in a few weeks or a month. Actually, this branch is more uniform ripening than you will see in other origins where pickers make 5-6 passes on the same tree. This year, there is so much cherry in Kona, the mills are backed up and the picking crews are in very high demand. Some farmers fly in experienced coffee pickers from Mexico and other coffee origins to harvest, since local labor doesn't fill the need.
Hawaii coffee
Yellow Caturra, at Kowali farm in Kona area Hawaii
Geese and coffee!
An organic Kona coffee farm with wandering geese.
Ripe coffee cherry, Kona
Kona coffee cherry, ready to harvest.
Roasted- Green- Parchment
Hawaii cupping competition, 3 stages of coffee all together.
Coffee_plantation_on_Island_of_Hawaii_1907
Coffee_plantation_on_Island_of_Hawaii_1907
Coffee_plant_with_berries_on_the_plantation_of_J.M._Horner_Paanilo_Hawakana_Hawaii_1907_from_Wikipedia
Coffee_plant_with_berries_on_the_plantation_of_J.M._Horner_Paanilo_Hawakana_Hawaii_1907_from_Wikipedia