Nepal Coffee is mainly consumed within the country, but exports have been increasing...

Coffee farming is still relatively new in Nepal, at least as a commercial crop.  In 1938, a mythic hermit named Hira Giri is said to have brought some coffee seeds from Sindu Province of Myanmar (then Burma) and planted them in Aapchaur area of Gulmi District,  Nepal.  After Hira Giri introduced coffee, it was not seriously planted until the government of Nepal imported coffee seeds from India 1968. Twenty years later it was advanced further towards being a commercial crop: Nepal Coffee Company (NeCCo), was started in 1983 and in 1984 a “Coffee development Center” under the department of Agriculture was set up in Aapchaur,  Gulmi. With the governments’ technological and financial assistance, people started to cultivate coffee and it slowly spread to more than 39 central and hilly districts of Nepal. 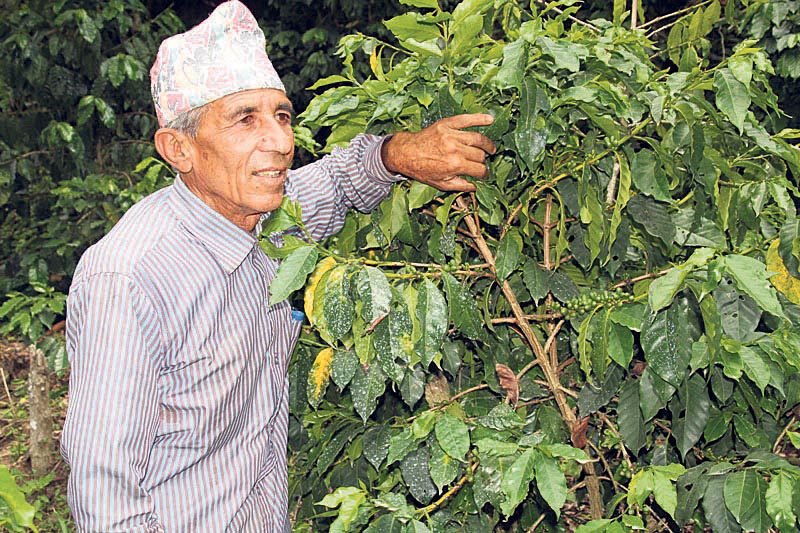 At least 6,346 farmers and entrepreneurs have been doing commercial coffee farming in 32 out of 77 districts in Nepal, according to a “Commercial Coffee Farming Survey Report” ,  The survey which was conducted for the first time in the Himalayan country states that the coffee farmers and entrepreneurs produce 1,573 metric tons of fresh cherry annually in 973 hectares of land.

The quality of coffee vastly depends on its processing methods. Farmers from Nepal commonly use two different methods; dry and wet processing. However, the wet processing method is more commonly practiced nowadays. Firstly, the fresh ripe cherries are harvested and sold to the pulping centers by the farmers and then they are pulped, fermented, washed and dried to produce fine dry parchment at the pulping center. Dry parchments are then collected by processors and hulled at the central processing unit to produce green beans

Though coffee was first produced in Nepal around 6 decades ago, it has only been around three decades since commercial coffee farming in Nepal was initiated. Though coffee is one of the most sophisticated crops to grow, compared to others in Nepal,  as it requires great care in all the stages of the coffee production process, it is also one of the products that have the highest market values and great returns. Provided that the farmers and businessmen are able to produce the highest quality coffee, it’s a highly profitable business. It is because of reasons like these that coffee agriculture and farming have been trending quite a lot among farmers these days. These days, many farmers who knows the benefits of coffee farming in Nepal, would definitely choose coffee agriculture and farming over other products.

Coffee farming in Nepal has impacted the life of farmers as well up to a great extent. There seems to be hope for them now to continue being farmers, and still live a good life.Coffee farming in Nepal has given the world a new type of coffee – Himalayan Arabica Coffee, which is a slight twist in the original Arabica Coffee, caused due to the difference in the soil, water, altitude and climate. Nepal is now renowned among the people who are crazy about coffee. Also, organizations such as Specialty Coffee Association of America and many others have recognized the coffee produced in Nepal as a high standard coffee, and Nepal as a country with an ideal environment for producing great quality coffee. Coffee farming in Nepal is responsible for so many positive changes in the context of national as well as global coffee industry.

The altitude from 800 m to 1600 meters in Nepal is considered good for coffee production, and it is between this altitude that the majority of coffee production area in Nepal is located. There are many hills in the hilly region of Nepal that have the adequate kind of soil and moisture for producing high quality coffee. The hills with eroded soil can’t grow any other crop, however, it is the same kind of soil that is considered ideal for coffee farming in Nepal. Though there are so many coffee farm scattered across the hills of Nepal, they aren’t enough. We are running way below our potential.

It is estimated that Nepal consists of around 1 million hectares of land ideal for coffee farming in Nepal, but somehow, only a small percentage of it is in use. Only around 1753 tons of coffee cherries are grown in Nepal currently, in 973 hectares of land area. This clearly suggests that we are way below our capacity when it comes to coffee production and the use of available land area. The reason could be the lack of personnel involved in the coffee industry in Nepal, including the ones who have technical knowledge, or the inability of the numerous governmental and non-governmental organizations to properly convert this huge resource into coffee farm.

The amount of coffee produced in Nepal is still small, and doesn’t even satisfy the local markets needs. And so, Nepal is forced to import instant coffee and branded organic coffee from different parts of the world, by spending millions of dollars. The key to getting all of this in the right places is to allocate more coffee production area in Nepal, and get more people involved in coffee farming in Nepal.These organization also need to conduct awareness programs to inform people about the financial and overall benefits of coffee farming in Nepal, and training that would equip them to be professionally involved in the field.

The hills have been degrading with soil erosion and landslides mainly because of deforestation; and the lives of the locals has been going from bad to worse primarily due to the lack of income generating sources. Considering the situation of Nepal, environmental and economical, coffee farming in Nepal can prove to be the ideal solution. The coffee plants that are planted on the eroded hills helps them retain the soil, and prevents further degradation. In the same way, establishment of coffee farm and production centers creates jobs for thousands of locals, especially the women, making them financially capable. All this results in improving the conditions, both economical and environmental.

Productivity Of Coffee In Nepal

The productivity of coffee in Nepal has increased tremendously over the last few decades. While in 2005 coffee was produced in only 19 districts, the current statistics suggest that coffee is grown in around 32 districts. The amount of coffee beans produced every year has gone to around 400 to 500 tonnes. It would not be a mistake to say that coffee industry in Nepal is worth over $1 million. There are so many factors responsible for the increase of productivity of coffee in Nepal. These factors haven’t just increased the size of coffee industry in Nepal, but also changed the life of so many people, especially the local farmers, who suffered from poverty.

The hills of Nepal doesn’t allow the farmers to grow different kinds of crops. The production was limited to only maize, millet, and so on. Since crops like these don’t have a really big market, the farmers often lived in poverty. Later, they came across the idea of producing coffee in Nepal. It wasn’t something that happened out of the blue.

Now, despite the fact that Nepal produces such a huge amount of coffee every year, it is not able to meet the demands of the local consumers by leaps and bounds. Altogether, 513 tons of coffee was produced between 2017 and 2018, however, just the local demand is around 7000 tons. And, not all the coffee that is produced here is consumed here. A large percentage of it is also exported to different parts of the world, mainly countries like Japan, Korea, United States, Great Britain, and so on..

We rarely have this coffee but check Sweet Maria’s list to see!

We have not traveled to Nepal for coffee , and credit for above photos is to Conscious Impact and their blog: https://www.consciousimpact.org/new-blog/meet-shyam

History Of Coffee Production In Nepal

The history of coffee in Nepal goes back to 1938 when a hermit who went by the name Hira Giri brought coffee to Nepal from Myanmar. He planted those coffee seeds for the first time in Nepal at a place called Aapchaur in Gulmi. Seeing the coffee plant grow, the beautiful flowers bloom and then later evolve into coffee cherries, other farmers were inclined into growing coffee themselves. And being the kind of person he was, Hira Giri distributed the cherries among them for free. This is how farmers in and around Gulmi started cultivating coffee. The coffee that was produced was either consumed locally, and a small amount of it was sent abroad through India. Neither the farmers nor the coffee that was produced in Nepal was given much importance.

Now, though Hira Giri is credited for bringing coffee for the first time in Nepal, a significant amount of credit also needs to be given to the Gurkha soldiers stationed in various parts of the world, and the laborers from Nepal, who worked at coffee farms in South India. These people brought Arabica coffee beans to Nepal from time to time, for the purpose of consumption, and for that of cultivation. This is how Nepali coffee farmers got their hands on Arabica Coffee beans. Currently, this species of coffee is the number one type of coffee grown in Nepal, and the quality of Arabica coffee, which is grown in Nepal, is regarded highly in the international market.

Another species of coffee that is grown in Nepal is called Cattura. In comparison to Arabica coffee, Caturra started getting cultivated much later. The first time the coffee bean was brought to Nepal was around the year 1990. The coffee beans were brought from Papua New Guinea, and they were planted at Nuwakot. The person who was responsible for this was Ujwal Rana. By planting Cattura, he got involved in the field of coffee production. Currently, he owns and runs Plantec Coffee Estate Pvt. Ltd. where he mainly grows and exports Arabica coffee.

Now, despite the fact that coffee had been growing in Nepal for such a long time, the crop got the recognition that it deserved only in the year 1983. This was also the time when coffee production in Nepal was regulated, and the entire system of production and distribution came to order. All thanks to the establishment of Nepal Coffee Company in Manigram, which happens to be located in Rupandehi district. The company allowed the farmers that produced coffee to reach a larger customer base. These customers weren’t just from Nepal, but abroad as well.

The bringing of the Arabica coffee beans to Nepal, and its cultivation, certainly happened before the 80s. The coffee production and export had been going on for quite some time before the entire system was regulated. The order that was introduced as a great hand in giving the product the reputation that it so rightfully deserves. At the moment, Arabica coffee produced in Nepal is considered one of the highest quality coffee beans in the world. Now, since the general buyers consider the brand and site of coffee production, as the determining factor for quality, they don’t tend to buy Nepali coffee. Nepal isn’t considered an ideal coffee producing country, and also, Nepali coffee isn’t packaged and distributed by large coffee selling brands. However, in the niche market, Nepali Arabica coffee has a huge demand and is regarded highly by the buyers. The customers there get coffee and judge coffee beans only on the basis of its quality

We rarely have this coffee but check Sweet Maria’s list to see!